Quantum Racing stars of the ‘stripey’ breeze on Independence Day

Ibiza, Spain (July 4, 2013) -The Stars & Stripes were flown with pride in the 52 fleet at the Royal Cup Marina Ibiza on American Independence Day, July 4th,  but it was Quantum Racing who were the stars of Day 3 of the Ibiza regatta for the 52 SUPER SERIES as the American flagged team rolled out two wins and a fourth place to take the overall event lead by two points ahead of Italy’s Azzurra. 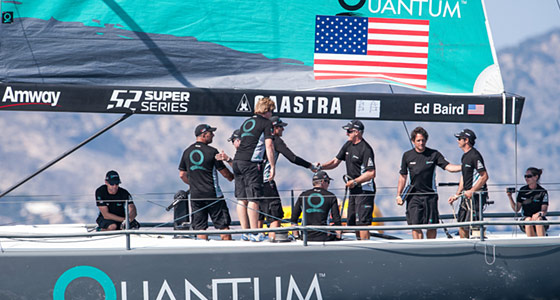 If the day started under a slightly cloudy sky with a fitful light breeze it finished with a more respectable sea breeze of up to 10kts with beautiful warm sunshine to ensure  the 52 teams which represent six different nations were able to enjoy a full three race itinerary.

Quantum Racing won two from three although their six points tally for the day was matched by the team which races for the Yacht Club Costa Smeralda. Azzurra won the second race which they complemented with a second and then a third, only just losing out second to Ergin Imre’s Provezza on the last run of the day.

Tony Langley’s Gladiator had started out as regatta leaders but they were not quite able to retain the same level of consistency, dropping to third overall.

The wind pattern on the race area changed from race to race but in each it proved relatively easy for the leading boat to extend to build a flattering margin by the finish gun. Nonetheless after a slow start to the 52 SUPER SERIES’ first visit to the Balearic island, Ibiza delivered a very acceptable trio of races today. Winds were a little stronger through the second and third races, but it is still a difficult, demanding arena.

Azzurra’s trimmer Simon Fry concludes:
“It is very, very streaky. The lanes of pressure are very, very defined. You can’t see them on the water very well and there is no geography which is causing them. I think it is very lane specific. When you get in a lucky lane you are all patting each other on the back. It is hard work, a venue to test the patience.”

Quantum Racing won Race 4 from the left side of the track, holding firm for the stronger pressure and slight rotation of the breeze which gave them a comfortable lead by the first upwind mark. A good recovery to third on the final run left Gladiator still holding the regatta lead, but by only one point. 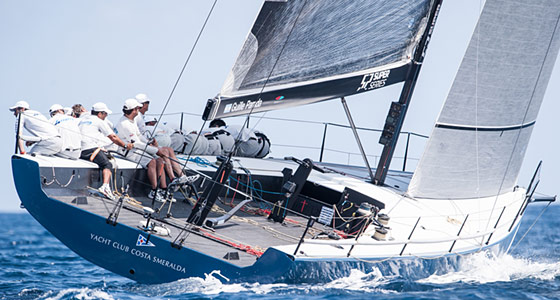 Azzurra won their first race of the regatta when they started off the left hand end of the line also whilst Gladiator and Quantum Racing engaged from early on. Rán Racing pipped Rio on the start line to take second.

And in the third race Quantum Racing held hard to the committee boat at the gun, coming around it with pace to win the right side of the course. That was enough to ensure they were unchallenged around the track, Provezza making a good gain on the final run to get their second place.

Friday is set to see the first coastal race of the season, likely to be between 25 and 50 miles depending on the wind strength and direction. Among the possible options in an easterly breeze is a course to Vedra island off the SW’ly tip of Ibiza, or to Tagomago on the NE corner. The coastal race is worth the same as a windward leeward in terms of points value, but teams have put considerable time and resources into the specialist reaching sails which are likely to be used, as well as making reconnaissance missions on the possible course extremities.

Ed Baird, USA, skipper-helm Quantum Racing: “Jordi and Terry did a fabulous job setting us up to be in the smart places to be on the race course and the guys did a terrific job making us go fast. It started out today a little bit cloudy and unusual, and filled in enough to get a start off and we were not sure where it was going to go next. Because it was cloudy and earlier in the day it went left, and we happened to be on that side and so we were happy. Second race we went right and won that side and Azzurra won the left and came out about length and and a half ahead of us at the top mark. We got a little tangled up in traffic and ended up with a fourth, but it was still a strong finish. And then in the last race we were excited to get out to the right hand side of things and that worked out too. It was a good day and full marks to the Quantum team.
It is interesting because sometimes in light airs it is hard to grow a lead, but here it seems like it is pretty straightforward what is going to happen next and if you can have a bit of a lead at the top mark then it does seem to slowly grow.
Azzurra had the same thing in the second race and Gladiator yesterday when they were winning, it is indicative of the venue rather than anything else.”

Simon Fry, GBR, trimmer Azzurra: “At the beginning of the day we had just said ‘right we have to close, or at worst not lose any points on Quantum Racing, Rán and Gladiator. So things panned out OK. We were a little disappointed with the last run on the last race, a 2,1,3 in the difficult conditions, we will settle for that.
It is very, very streaky. The lanes of pressure are very, very defined. You can’t see them on the water very well and there is no geography which is causing them. The second and third races were a bit breezier and Maria did a good job to keep us out for the three races. We are comfortable with our speed. I think it is very lane specific. When you get in a lucky lane you are all patting each other on the back. Even in the last race today on the starboard lay line we were pulling bearing against Quantum and sometimes we were just slow, ripping bearing out of us. It is hard work, a venue to test the patience.”

Nick Rogers, GBR, skipper-helm, Provezza: “It was a good day for us. We are still new as a team, learning the boat and how to sail it together. We had three good starts and had some good tactics. We are always fighting when we are in the middle of the fleet. We struggle at times with the boat handling. The last race was just right for the boat. In general we find the light winds a bit easier. The boat is more geared towards light winds.”