Celebrating the 100th year of the H Class

There are about 40 entries expected to compete August 8-10 in the National Championship of the Buzzards Bay Boys Boat, better known as the Herreshoff 12 ½ (measured at waterline), which is celebrating the 100th year of this famous boat.

Hosted by The Buzzards Yacht Club in Pocasset, MA, this town is where the very first fleet of 12 ½’s was located. These 15’8” sloops, cedar planked over oak frames, were designed by Nathanael G. Herreshoff in 1914. In the ensuing years, the Herreshoff Manufacturing Company built and sold over 360 between 1914 and the end of peacetime construction in 1942.

Originally gaff-rigged, several later boats were Marconi-rigged. The boat also had several other names in local areas such as Doughdish, Bullseye, Fox Eye, etc. Another 80 or so of the wooden 12 ½’s were built by the Quincy Adams Yacht Yard and Cape Cod Shipbuilding, before CCSB started producing them in fiberglass in the 1950’s and called it the Bullseye.

“The Herreshoff Marine Museum has entered one of our boats, #761 BONITA,” said museum CEO Dyer Jones. “She is one of the first fleet of 20 boats ordered, but we are far from the oldest. #745 ELF is the second boat built and she will also participate.” 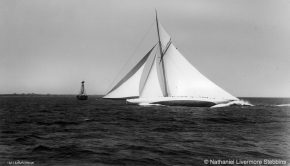 Vagrant: The recreation of a masterpiece →