The IMOCA 60 HUGO BOSS, which was abandoned in the singlehanded 2006-7 Velux 5 Oceans Race, has been found washed up ashore in Patagonia at the southernmost tip of South America. British skipper Alex Thomson, who had to be rescued from the yacht by competitor Mike Golding, had lost his keel some 1000 miles from Cape Town in the Southern Ocean in November 2006.

With the finding of the yacht, this translates to it traveling nearly 13,000 miles over 10 years across the Southern Ocean.

Here is an excerpt from the original race report which was posted on YachtsAndYachting.com on November 23, 2006…
——————
British solo skipper Alex Thomson is in trouble in the Southern Ocean, during leg one of the VELUX 5 Oceans. At approximately 03.30 GMT this morning, his yacht HUGO BOSS was sailing at 18 knots, in 30 knots of wind, when the canting keel suffered extreme structural failure and the boat capsized.

Thomson, one of the favourites in the VELUX 5 Oceans race, was almost neck and neck with second placed Mike Golding (GBR) when the incident happened, with just one nautical mile separating the two boats. He was sailing downwind, around 1000 nautical miles south of Cape Town, South Africa, with three reefs in the mainsail in order to avoid over-powering the boat.

“I was in my bunk grabbing a quick power kip when I was suddenly thrown across the cabin as the boat broached,” explained Thomson. “I ran up on deck and went to ease the mainsail but nothing happened. I then went to try and cant the keel, but again nothing happened. By this stage the boat was leaning right over on its side with the spreaders in the water, so I went back down below to look inside the keel box. The section which attaches the rams to the keel had completely snapped off and the keel was swinging freely. I went back up on deck with the boat still on its side. I took all of the sails down and finally the boat righted itself.”
——————
The Race: The Velux 5 Oceans 2006-7 covered a route of 30,140 nautical miles. Seven skippers competed in the singlehanded race that started in Bilbao (Spain), on October 22, 2006, and finished there. There were only two stops, in Fremantle (Australia) and Norfolk (USA).

More to the story: Shortly after a dramatic rescue, in which the British solo sailor Mike Golding pulled fellow racer Alex Thomson from a life raft on the Southern Ocean, the two encountered another perilous situation when the top of Golding’s mast broke in two places. The pair was able to sail under jury rig to Cape Town where Golding then made the decision to retire from the race. 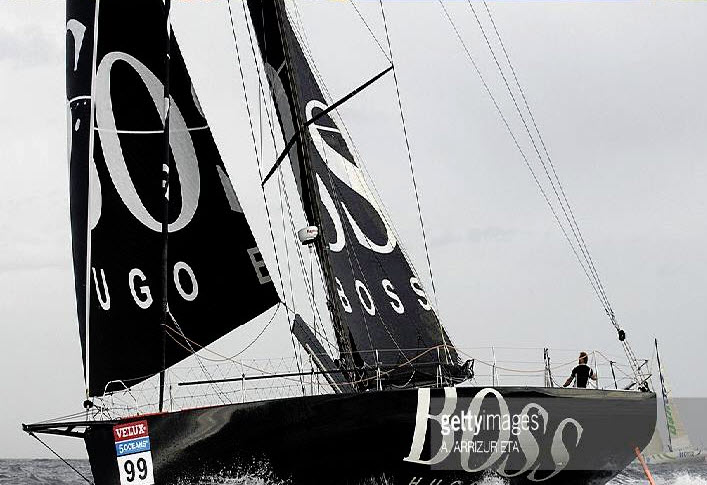 VIDEO: This Boss is The Boss →