Cardwell Potts, sailing with his wife Jennifer, Ted Ferrarone, and Kendra Emhiser, a quartet of Viper 640 sailors from Larchmont (NY) Yacht Club, won the Viper 640 International Championship Warm-up Regatta. Held November 13-14 and sailed on Bermuda’s Great Sound, 26 Vipers competed in the Warm-up with the fleet expanding to 42 Vipers for the International Championship.

Hosted by the Royal Bermuda Yacht Club and the Royal Hamilton Amateur Dinghy Club, this two-day regatta was the warm-up for the Aspen Viper 640 International Championship sponsored by EFG that will be raced on the same waters Wednesday to Saturday, November 16 to 19. Details here.

“Bermuda is a beautiful place to sail, especially in the middle of November when everyone at home has already put away their boats,” said PRO Stuart, “and it’s nice to have such a large turnout of Vipers down here in Bermuda.”

Cardwell Potts noted, “The conditions were ideal for our 4-up crew. After doing well in the 2015 North Americans in our home waters, we’re excited to compete here in Bermuda for both the 2016 North Americans but also the first International Championship.”

Two races were run Sunday and three on Monday, all in a predominantly northeast wind with flat seas and breezes in the 12-15 knot range. Champagne sailing by anyone’s definition.

Potts/Ferrarone, with scores of 1-2-1-3-2, finishied with a 23-point lead over another Larchmont Yacht Club team comprised of Peter and Rachel Beardsley with Jay and Rachel Rhame. Viper Class Governor Justin Scott (Darien, CT) was in third with 36 points followed by Zeke Horowitz (Annapolis, MD). 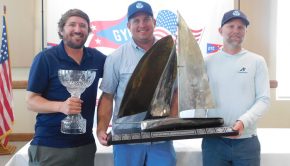