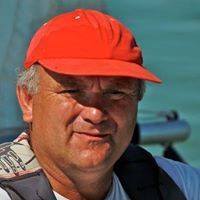 In the Canadian province of Alberta, out on Chestermere Lake, Art Buitenwerf is on a mission. After sailing off and on since he was eight-years-old, the Chestermere resident is now planning to sail the lake 150 times this season as his way of celebrating Canada’s 150th Anniversary.

Chestermere 150 Sails was inspired by Buitenwerf’s wife. As an immigrant from England, she remembers going to Confederation Park in Calgary for Canada’s Centennial. With Canada 150 and all of the initiatives that are being started to mark the anniversary, his wife suggested he do something for Canada 150.

He thinks that the Calgary Yacht Club is an undiscovered secret hidden in Chestermere. There will also be an element of celebrating the regions history. The route for 150 sails takes about an hour depending on the wind and stretches from the club to The Landing and back. As he reaches the turnaround point, Buitenwerf will blow his bosun’s whistle and announce a historical fact.

He plans to try and focus on the Chestermere area from Confederation until today. “So, a little bit like a town crier as I round up by the north end,” said Buitenwerf.

He is hoping to not just raise awareness but to inspire people to join him as he sails. “It’s not intended to be a solo event,” he said, “I’m encouraging people to come with me and enjoy the lake.”

People of all skill and experience levels are invited to join him either by sailing alongside him or by sailing with him. He has set up a Facebook page, Chestermere150Sails, where people can contact him to arrange a time to sail with him. He will also be updating the page and using the hashtag #150sails to record his progress through the summer.

For each of the landmark sails, 50, 100 and 150 Buitenwerf hopes he will be joined by a small fleet of boats. “Anything that floats come and meet me,” he said.

Buitenwerf launched Chestermere 150 Sails on April 30 and hopes to complete his 150th sail in mid-September. “I have targeted September 10 for completion, thus, 134 days to do 150sails,” he said.

Buitenwerf grew up on Salt Spring Island in B.C. and learned to sail at age eight on a Sabot built by his brother. If all his chores were completed, Buitenwerf was free to go sailing and come home when he got hungry. “I would leave, in the summer especially, many mornings with a bag of carrots and a bag of apples and I’d come back at sundown,” he said.

When he moved to Alberta, at the age of 19, he fell out of the sport only getting back into it again in 2009. Buitenwerf recalled that he purchased a Laser but only sailed it once in Invermere, B.C. before selling it. “It wasn’t the ocean,” said Buitenwerf. “I guess I was a bit of sailing snob.”

He was thrilled in 2009 to discover the Calgary Yacht Club based in Chestermere. Buitenwerf, his wife and his then early teenage daughter attended an open house at the club. They had been looking for some activities for their daughter when Buitenwerf’s wife saw an ad for the open house in a magazine.

When they arrived, Buitenwerf was amazed at the quality of the club. “I’m going wow, I can’t believe that…this type of facility is here,” he said.

After chatting with some of the members at the club they decided to join. “We walked out with a membership and a boat,” said Buitenwerf. The boat and membership was meant to primarily be for his daughter but Buitenwerf was slowly drawn back into sailing to the point that along with competing in sailing regattas, he estimates he sails the lake on average 100 times a season.

The connection to the environment is what has drawn him back to sailing. “With the water, wind, waves, wildlife,” he said. “Big wind, small wind, you can get magic out of it.”