Mystic, CT. (August 26, 2020) — Mystic Seaport Museum will present its 2020 America and the Sea Award to Tom Whidden, an honor that recognizes those individuals and organizations whose extraordinary achievements in the world of maritime exploration, competition, scholarship, and design best exemplify the American character.

Whidden, one of the most applauded sailors of all time, is a member of both the America’s Cup Hall of Fame and the National Sailing Hall of Fame, and president and CEO of North Technology Group, parent company of North Sails.

“Tom is a perfect fit for this award,” said Mystic Seaport Museum President Steve White. “Not only does he have a distinguished record as a competitive sailor, but he has also served as an important ambassador for the sport and the maritime community. For young sailors across the country and beyond, he has been a positive role model and mentor.”

Whidden will be honored for his remarkable accomplishments in competitive sailing and his leadership in the design and manufacturing of technologically advanced sails at North Sails.

“I have spent my life racing sailboats and making products that make those boats perform their best. For me to be recognized by the most prominent maritime museum in the United States, for doing what I love most, is a dream come true,” said Whidden.

Whidden’s career soared in 1979 when he joined Dennis Conner for what would become a total of eight America’s Cup campaigns, racing as tactician in five series races and winning three times: 1980, 1987 (regaining the cup after Australia’s 1983 victory), and 1988. He has won the Newport-Bermuda Race five times, and had repeated wins on the European racing circuit.

Following his racing success, Whidden joined North Sails in 1987, building it into the largest sailmaking company in the world, and later becoming CEO and co-owner of North Technology Group. He led North Sails and North Technology Group through decades of evolution from manufacturing paneled sails in a vast network of sail lofts to the current centrally managed, technologically driven, manufacturing system.

In 2004, Whidden was elected to the America’s Cup Hall of Fame “for his brilliance as a tactical advisor, his soundness as a crew organizer, and his mastery of winning in difficult boats under the most demanding conditions.” Most recently, he was inducted into the National Sailing Hall of Fame in 2017.

Mystic Seaport Museum will recognize Whidden on October 23, 2020. The award presentation, special toast to the honoree, auction, paddle raise, and special celebrity appearances will be livestreamed from the Museum beginning at 6:15 pm ET. 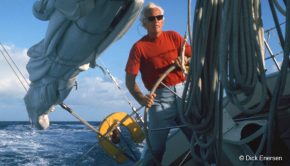 New members for US Sailing Foundation →