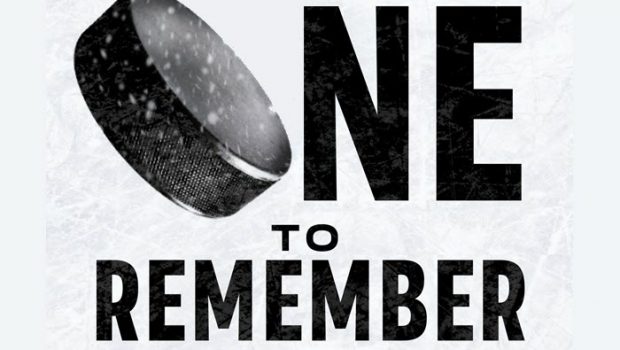 The latest book from bestselling author Ken Reid, One to Remember: Stories from 39 Members of the NHL’s One Goal Club, unearths the blood, sweat, tears, and laughs of the journey to and from a single big-league goal.

If you’ve ever dreamed of scoring in the National Hockey League, Reid interviews and profiles 39 men who did just that… but only once… and the story for one of these men – Hank Lammens – involves the love of both hockey with sailing.

Now 54 years of age, there’s an interesting little gap on Hank Lammen’s hockey stat line: the 1991-92 season does not exist. It does not exist because Lammens had other things on his mind: specifically, the 1992 Olympics, that is, the 1992 Summer Olympics. The professional hockey player put down his skates and jumped into his Finn sailboat.

Sailing and hockey had been on equal ground for Lammens since he was a kid growing up in Brockville, Ontario. Brockville just happened to be the main training site for Canada’s national sailing team. Most kids these days, those who actually play multiple sports, usually have a decision to make by their mid-teens. Which sport do I concentrate on? Lammens just kept on doing both; it was a world-class juggling act.

“During my first year of junior hockey, I missed training camp because I was at the World Sailing Championships in Italy. I came back from Italy and I missed camp, but I made the team. The next year, I had qualified for the Worlds, which were in Auckland, New Zealand, in December. And that was my college hockey recruiting year.

I said to the coach: ‘I qualified for the Worlds, I’m the only guy in Canada who qualified. Would it be okay if I miss a couple of weeks of hockey in December?’ I was the team captain. My coach said, ‘Absolutely. You go.’ So I missed a couple of games in December because I was the World Sailing Championships in New Zealand, which was a great experience.”

Lammens says this all very casually. He was competing on the world stage in sailing and also playing good enough hockey to earn a scholarship to St. Lawrence University (Canton, New York). While he was at school he kept up both sports, sailing in the summer and hockey in the winter.

He was good enough on the ice to be drafted by the New York Islanders in 1985 and was eventually named an all-American with St. Lawrence. “The year that I was selected an all-American was pretty cool. My partner on the plaque was a guy named Brian Leetch.”

Lammens was keeping world-class company on the ice and on the water. He started his pro hockey career in 1988 with the Springfield Indians and kept on sailing in the summer. A couple of years later, while he was still in the America League, Lammens struck gold on the water. He won his first Finn World Championship in 1990 followed by another one in 1991. Even though it may not have been a big deal for the Canadian media at the time, Canada had a real two-sport star.

“A lot of people don’t understand what international sailing in the Men’s Heavyweight Finn Class is. I won the Worlds in 1990 in Greece. Then I went to visit my sister, who lived in Portugal at the time. When I got to her town, they gave me the key to the city. I was named a life-time member of the yacht club there.

“It was a huge deal. To be a Finn Gold Cup champion is huge in Europe. Then when I came home to Canada, my yacht club had a little thing, they put out a sign in front, and that was about it. People really didn’t understand what it was that I accomplished.”

Lammens was a world champ, but he was not mobbed on the streets in Canada. He was, however, nominated for Canadian Athlete of the Year in 1991 but lost to Kurt Browning. “I went to this big thing. It was the sailor and the figure skater. When I got called up to the podium people seemed to think, ‘All right, cool.’ When he was up there, it was like we were at a Beatles concert. So, the sailor isn’t going to win that,” Lammens says with a chuckle.

He was treated like a Stanley Cup champ in Europe, but not quite at home. And with the 1991-92 season approaching, Lammens decided to put his pro hockey and Stanley Cup dreams aside. He stepped away from professional hockey that season to prepare for the Barcelona 1992 Olympics.

Lammens finished 13th in Barcelona, and when he came home, he had to figure out what was next. He had no idea. His brainstorming session lasted about 24 hours: “I got back from Barcelona and I sat at home for a day or so. And all of a sudden, the phone rang and it was Paul Henry, who was the GM of the Canadian national team.”

Yep, Lammens was about to hit the ice again. And another Olympics was in sight – the 1994 Winter Olympics in Lillehammer, Norway.

“Henry said, ‘Knowing you, I think you’ll be the captain of the team and you can compete in the summer and winter Olympics.’ I thought, ‘That sounds good.’ He asked me to think about it. I asked when he needed me in Calgary. He told me, ‘Camp starts in two weeks.’ I said, ‘Well, can I come out on Monday? Because I have to skate.’ I hadn’t skated in a year.” Lammens loaded up his truck and made the drive to Calgary. The plan was now in place. Hank Lammens, summer Olympian, was set to become Hank Lammens, winter Olympian. But plans do change. Paul Henry was half right: Lammens did captain the team, but he didn’t stick around for the Olympics. “I got an opportunity to sign with Ottawa. I thought… the National Hockey League is pretty good.”

And that is how the Olympic sailor became the NHL goal scorer. Lammens spent most of the 1993-94 season with PEI in the AHL, but he did play in 27 games with Ottawa, including a game on November 27, 1993, at the old Igloo in Pittsburgh.

“Last summer, I was there with a kids’ team for a hockey tournament. We were playing in the Penguins’ new rink. I pointed to the parking lot and I told the kids, ‘That’s where I scored my goal. They tore down the Igloo.’ And all the kids said, ‘What are you talking about?'”

“The goal was kind of a new-era goal. I followed up on the play. I was the trailer. We were on a three-on-two. Alexei Yashin had the puck down the wall. I think the defenseman looked at me and thought, ‘Well, that guy’s not going to get the puck.’ Yashin dropped it back. I shot it far corner, along the ice. Maybe the goalie thought I was going to dump it in or something.”

So, the world champion and Olympic sailor was now an NHL sniper. Hank Lammens has a pretty nice resume. It is padded out with his current gig, working in the financial district in New York City.

“The Gold Cups obviously were, for me, the peak in sailing, and for me, in hockey, the year I was selected as an all-American is up there,” Lammens says when he’s asked to rank where his goal fits into his journey. “Hockey-wise, to be recognized over a full season was pretty cool. Scoring that goal is not really something I focus on.”

Just how casual is Hank Lammens about his lone NHL goal? Very.

Exhibit A: “My son was starting to skate. He was three of four years old. We have a little pond in the backyard. He started skating around and I got him a little stick. I hadn’t really skated in a long time because I was trying to do this Wall Street thing. We were skating around and we needed a puck. I remember I had two pucks on my workbench.

“One puck was the one from my first goal at St. Lawrence and the other one was the puck from my goal in Pittsburgh. I went and got them, and my son and I started to pass one of the pucks around. There was a little open ice where the water was flowing in. I passed the puck to my son and he missed it. So, the puck goes into the bog and I was down to one puck.”

Breathe easy, everyone, there is nothing to worry about. It was the St. Lawrence puck – hold on… wait. Exhibit B: “About 20 minutes later, we lost the other puck. So I lost both o my sentimental pucks. They’re actually still out there somewhere in my backyard in this mud bog. They’re gone.”

Excerpted from “One to Remember: Stories from 39 Members of the NHL’s One Goal Club” by Ken Reid. © by Ken Reid. Published by ECW Press Ltd.