Conditions ranged from 4-5 knots on the first two days to 10-14 knots on the final two. Jackson and Andrew crewed for Andrew’s brother, Marcus, when they won in 2019 the combined North American and World Championships in Long Beach, CA.

Over the first two days, Benvenutti’s team was flawless scoring seven consecutive wins. Over the last two, they added two more to finish with nine bullets, a second, and two fourths.

With the leader “over the horizon” points wise, the keenest competition was for the other top podium spots. Going into the final day, there were four points between Mark Zagol, Tim Desmond, and Drew Buttner in second and Jay Rhame/Peter & Rachel Beardsley in fourth. Sandwiched between the two were Mareck Zaleski, his father Chris, and Jacob Bradt. The final sport came down to the final race.

Jackson Benvenutti’s take on this win was heartfelt.

“I’ve sailed a lot of boats and even won the Viper Worlds and NAs before…but always in a crew position,” said Benvenutti. “This year, I wanted to give it a try as a helm. I can’t tell you how happy I am with this win.

“That said, I couldn’t have done it without Andrew and Chris keeping me in the right places on the course and keeping the boat going fast. In addition, as a sailmaker I get to sail in a lot of classes; however, I love being part of the Viper 640 class because of all the great people I get to sail against.”

The top Corinthian team was Zagol in second place, and the highest scoring Masters (55+) was local sailor Sam Hopkins. 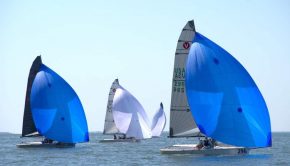