Ibiza, Spain (July 5, 2013) – Tony Langley and the crew of Gladiator proved their staying power as well as their skills today when they won the 33 miles coastal race at the Royal Cup Marina Ibiza, holding off regatta leaders Quantum Racing all the way round the long upwind- downwind passage which took the 52 SUPER SERIES up to the NE corner of Ibiza to the finish line off the entrance to the Ibiza town harbour. 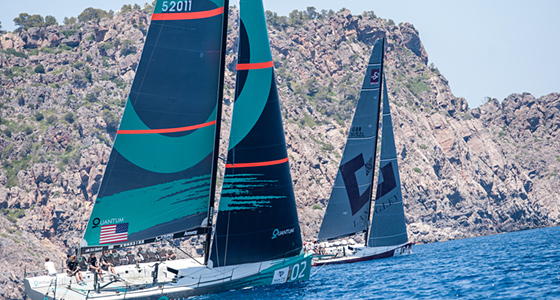 Over a well deserved cold beer after the conclusion of the four and a half hours passage in the fierce Balearic sunshine the British owner-driver expressed his quiet satisfaction at having kept at bay the Quantum Racing team, which includes five ex Alinghi crew, winners of the 2007 America’s Cup.

“I had Quantum Racing breathing down my neck for a couple of hours on the windward leg. I was just thinking: ‘these guys don’t make mistakes, you just have to keep concentrating’.”
“ That is the thing for me, benchmark against the best, the only way to improve!”

The Ed Baird skippered Quantum Racing chased all they could but could not close down Langley’s crew which lead from the leeward gate of the preliminary windward-leeward circuit. But their second place, with Interlodge up in third and Jean Luc Petithuguenin’s Paprec in fourth, mean the American crew extend their overall lead to four points, whilst the win for Gladiator promotes them to second overall going in to Saturday’s final races. 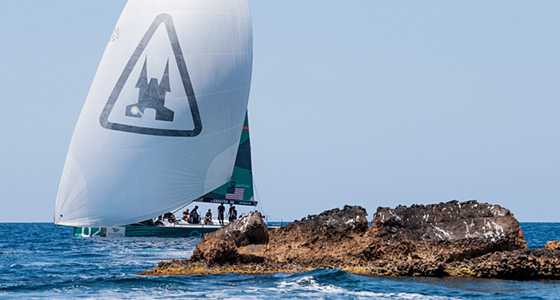 Although it was Manouch Moshayedi’s Rio which went hard right on the first beat to lead the pack at the first turn, their choice of the left side downwind saw them slide back into the pack. Quantum Racing, having fought for the left end of the start line, were able to get out far enough to the right to take the benefit of a small right hand lift which got them into contention early. Azzurra were up to third during the long beat north east, but lost out to Interlodge and the hard battling Paprec when they were forced offshore, out of the beneficial lift towards the shore. Managing the lee of the Tagomago island, the rounding mark, was also key. Overall there were very few passing opportunities, especially on the 14 miles run home.

Chris Larson, tactician off the winning Gladiator affirmed that they had stuck with their strategy throughout:
“It was not as difficult leading as it would have been to be back in the pack. That would have been a long day trying to claw back places. There were not many passing situations in the race. It could not have gone any better. We had a strategy and executed. We did a pretty good job of holding off Quantum.”

Tony Langley, GBR, owner-skipper-helm Gladiator: “ I don’t do offshores. That is as far as I like to go! It was a tough race. We had a good first beat. We got off the line well and wanted the right which we got. And I had Quantum Racing breathing down my neck for a couple of hours on the windward leg, I was just thinking: ‘these guys don’t make mistakes, you just have to keep concentrating’. That is the thing for me, benchmark against the best, the only way to improve!”

Chris Larson, USA, tactician Gladiator: It was not as difficult leading as it would have been to be back in the pack. That would have been a long day trying to claw back places. There were not many passing situations in the race it was a good job by Michele Ivaldi our navigator just going up the first leg when we chose right. We thought there might be a little more pressure offshore, it was still early in the day and it was supposed to go a little more right. It went about eight to ten degrees right and there was some more pressure. That was more than enough to get across the pack. It could not have gone any better. We had a strategy and executed. We were most weather boat and as soon as the first boat tacked out and started going right we tacked on them.
I think the race played out as we expected. We knew the breeze would be more left shifted at the rounding island and so you always wanted to be close to the shore. The further you went up the shore the more left shifted the breeze was going to be and so you always wanted to be to the left of your competition going upwind. Most of the headlands there were not too many holes or light spots under the headlands. We did a pretty good job of holding off Quantum.

Juan Vila, ESP, navigator, Quantum Racing: It was long day. A coastal race of almost 35 miles there were still some passing lanes and so Gladiator deserve a lot of credit for holding us. They were ahead after the first windward leeward for sure but then it was also tough for them to hold their lead. There was a persistent shift to the left up the track to Tagomago Island, it was quite hard to push it to get the most from the shift but not get it lighter. That was the key point going all the way left. Gladiator really did a very good job on covering all the passing lanes. On our side we were also happy to keep second.
We are happy to extend our lead on our next competitors.

Andrea Visitini, ITA, navigator Interlodge: It was a tough race, lots of shifts and you simply had to go with the rhythm and the pressure and stay in phase. That was the first thing. The long beat was a consistent shift. The big shadow created by the island was the key point, we managed to sail through it nicely. We planned that in advance and just stuck with crossing it where we planned.