Ibiza, Spain (July 6, 2013) – Quantum Racing made it a second 52 SUPER SERIES regatta win in a row when they crossed the last finish line of the Royal Cup Marina Ibiza today in second place, completing a 1,2 final day to run out regatta winners by seven clear points ahead of Tony Langley’s Gladiator. The crew which is skippered by Ed Baird for owner Doug DeVos add the giant silver Royal Cup to the Conde de Godo Trophy they won last month in Barcelona. 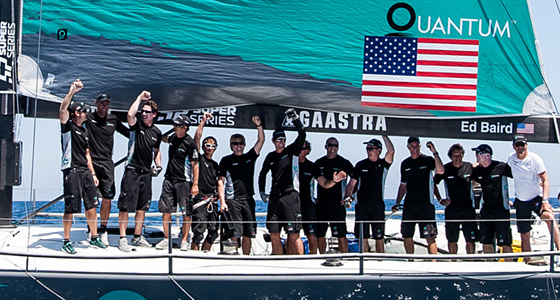 In Ibiza’s predominantly light and challenging conditions the Quantum Racing afterguard of Terry Hutchinson and Spain’s Olympic gold medallist Jordi Calafat did the best job of keeping in the strongest wind pressure, complementing their assured tactics with good all round boat speed in what were certainly the lightest conditions to prevail all the way through a 52 event for a number of years.

Quantum Racing won four races from nine starts. Of their two second places, it was when they slid quietly past Provezza at the finish line of the second race today – driving gently for the committee boat under the fierce Ibiza sunshine– that the US flagged team were able to finally enjoy the satisfaction of a job well done at a venue which is new to the 52 SUPER SERIES, which for most represented a white sheet of paper when they arrived last weekend.

Tactician Terry Hutchinson paid tribute to the hard work of the Quantum team, endorsing the always improving relationship and understanding with gold medal winning strategist Jordi Calafat, a partnership which must worry the opposition considering that it only started in Barcelona last month:

“We sail the boat really well in the hard spots, that is a strength.” Hutchison reflected on the dock in the Marina Ibiza, “ And so we are going well.”

“And Jordi and I’s developing relationship is getting better. He is cutting me some slack in certain situations and that is becoming a strength which is really good. He is strong minded, has a gold medal and is no slouch. He is very, very good and could be doing my job equally well and so it is a case of developing that relationship with each other. His instinct was really really good this week.” 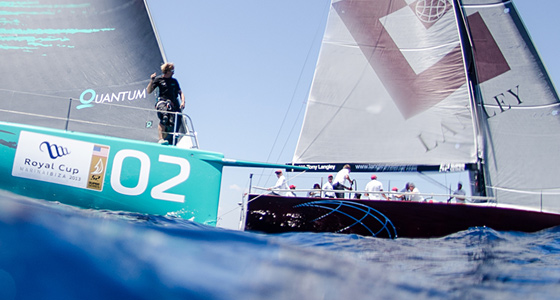 Tony Langley’s team, with Chris Larson calling the tactical shots, completed their best 52 SUPER SERIES regatta result yet when they took second step on the podium, one point up on the third placed 2012 52 SUPER SERIES champions Azzurra. Gladiator could make no impression on Quantum Racing in the first race today and finished second and ended up on the wrong side of Quantum Racing when a favourable shift came during the second race to cross fourth.

Azzurra, the Italian team which sails for the Yacht Club Costa Smeralda had an uncharacteristically up and down week, but finished with a victory in the last race today. 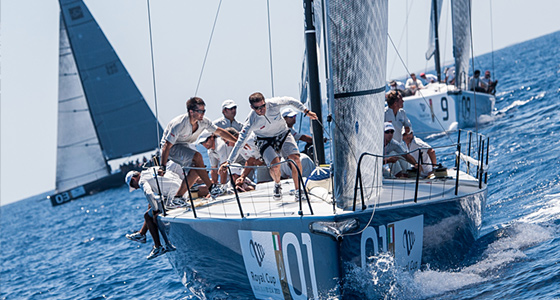 The lighter conditions presented opportunities for all of the teams through the eight boat fleet to excel at different times. Ergin Imre’s Turkish flagged crew on Provezza finished on something of a high note with a third in the last race, but they lead the fleet round the course in the second race, scored another third and a second over the week, were regularly in contention to finish fifth overall, just four points behind the world champions Rán Racing.

Terry Hutchinson, USA, tactician Quantum Racing: “Overall it was a really challenging and tricky week. It was very similar to the conditions that we had in Barcelona, only lighter and streakier. Most of the time the left hand side of the race course would work but sometimes the right would come in big and so it was always just balancing knowing that was out there versus what you could see.
I think one of our strengths is we sail the boat, from a trim perspective and with Ed driving, is we sail the boat really well in the hard spots, that is a strength. And so we are going well. And Jordi and I’s developing relationship is getting better. He is cutting me some slack in certain situations and that is becoming a strength which is really good. He is strong minded, has a gold medal and is no slouch. He is very very good and could be doing my job equally well and so it is a case of developing that relationship with each other. His instinct was really really good this week. Part of the developing relationship is trusting him with those calls. And trust each other. And when it hasn’t worked out we have had a thorough enough discussion that we know why.”

Chris Larson, USA, tactician Gladiator: “Quite honestly we had a pretty good day and they did what they had to do. We were second in the first race and second at the weather mark in the second race, we got off the line and gave them a bit of a run, we can’t complain it was a good day for us, solid.
A few new changes on the boat have helped things out and Tony is getting better and better with each event. And the lighter weather helps a little bit so we have a small advantage there. But its a team effort and its getting better as a package and our performance is showing.

Guillermo Parada, ARG, Skipper: Azzurra: “ We had a great victory in the last race, we were focused on what we had to do. We obviously didn’t have the best week here in Ibiza while Quantum had an almost perfect week. But there are still two events to go and the game is wide open for the season. We’ll take a couple of days to relax, analyze the regattas and come up with a plan and we’ll be even stronger for Palma.”

Jonny Goldsberry, USA, strategist, Interlodge: “ It is pretty much just like the last event  in that everyday we worked better as a team, got tighter and stronger and today we pulled off a couple of top 5’s which we are all pretty proud of and kind of kept the wheels on the bus as we call it. Everything is getting better for us and Manouch has got a lot stronger and confident at driving and the sails, crew work were all better. Its challenging with all the ups and downs on the racecourse, lefts and rights and pressure changes, once the jib trimmer and the main trimmer and the runners were all in timing everything worked really well, we finally locked it in today.”