Palma de Mallorca, Spain (July 30, 2013) – With a victory in the third and final race of the day for the 52 SUPER SERIES at the 32nd Copa del Rey on the Bay of Palma when Rán Racing’s unbeaten sequence was halted by a sixth place, Quantum Racing seize the overall regatta lead by a single point. 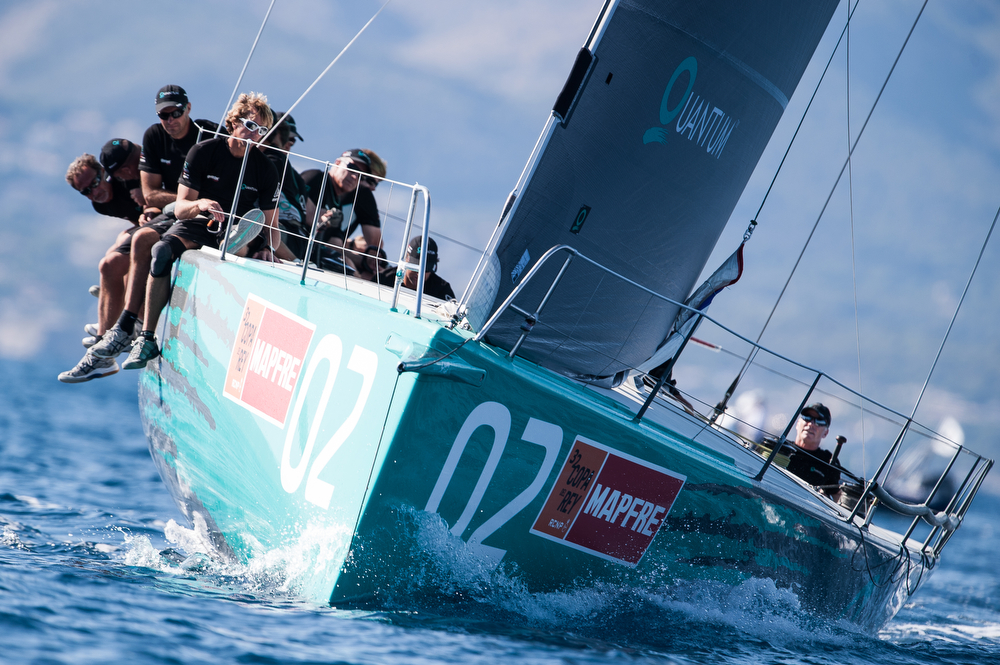 Niklas Zennström’s team had already completed one very impressive recovery – getting back from an OCS at the start of the second race to win in its last 100 metres after rounding the first top mark ninth and hold on to their winning sequence. But they were unable to climb through the fleet as efficiently in the subsequent contest and so the American flagged team, which has already won overall in Barcelona and Ibiza, now top the Palma regatta leaderboard.

It was a very long, hot day on the water as the race officers brought the regatta back to schedule by setting three races to take advantage of the return to Palma’s usual sea breeze conditions.

While the SSW’ly held out long enough there were sufficient shifts and changes in pressure to ensure that the track was far from the ‘one way’ route that this popular venue has a reputation for, and there were ample opportunities to exploit a differing range of tactics.

Quantum Racing’s 2,2,1 was the strongest aggregate for the day, but after seeing Rán Racing’s first two wins today, the 52 SUPER SERIES leaders might have considered the gods were minded to side with the World Champions, not least when Zennström’s team rallied from ninth at the first top mark of the second race today, to pass the leeward gate second hard, on the heels of Azzurra, before going on to win at the death.

By comparison Rán Racing’s first win today was relatively conventional, leading off the start line to be able to keep Rio and Rán Racing in check all the way around the course. Azzurra fought back from being OCS to finish fourth while Quantum Racing just eased past Manouch Moshayedi’s Rio on the second beat for second.

Azzurra lead the second race but dropped to third as they engaged with Quantum Racing on the last run and left the door ajar for Rán Racing to squeeze in for their second win of the day.

Quantum Racing stuck with their convictions to the left of the first beat in the final race today and were rewarded with a handy lead ahead of Tony Langley’s Gladiator, while Rio picked up their second third place of the day to lie fourth, just one point behind Azzurra, the defending 2012 52 SUPER SERIES champions.

Terry Hutchinson (USA), tactician Quantum Racing (USA):  “We did quite good work today, Ed (Baird), Warwick (Fleury), Jonesy (Brett Jones) and Lorenzo (Mazza) had the boat going really nicely through the water. The middle race was a bit of a disappointment because we had a 50 metre lead at the last top mark but lost it to Rán Racing – who have just been on fire – on the last run.  But we sailed a nice bounce back race then, the guys nailed the start and we stuck to our guns. Everyone kept taking a step out to the right to the pressure line, but we were happy with the middle and the upper left and low and behold it worked. We had a nice lead at the top.
It is hard to stay focused on a long hot day like that, that is the most challenging part of the day. Some of us are straight off a Farr 40 regatta in the USA and we might be feeling a little bit if jet lag at this stage but in the same breath there is so much to play for then it is not that hard to stay focused. The nice thing about sailing with really good people is they keep cracking the whip on you.”

Dee Smith (USA) tactician Rio (USA): “We had a pretty good, steady day. The course gave us lots of options, it wasn’t left it wasn’t right. It was a bit of both and we were able to pick a few shifts and the boat is going better and better every day. It was more a day of survival than of doing great work. We are pretty happy, the more you sail together the better you get. We had a long way to go but we are getting there.”

Jon Gunderson (NZL) trimmer Rán Racing (SWE): “We kicked off with another win which we were pretty happy about. We got some lucky breaks, maybe getting some of the luck we feel we did not get in Ibiza. We had to scrap pretty hard for that second win when we over the line. We made a pretty good comeback up the first beat which got us back into the game. On the last run in the last exchange we got on top and we crossed in front to win. We saw some breeze out to left but it was a little bit of the roll of the dice – we felt we are due some luck – and then we kept it tight and we saw an opportunity when Quantum Racing and Azzurra were locked together and got a shift and that was all it took.
Instantly up that first beat of the final race we had a good start and more or less where we wanted to go but it just did not pan out the way we thought it would.
It is a long, long regatta so we are not thinking about the points at all at the moment. It is important not to be out of it at this stage, but a point off the lead is good at this stage. We are in the hunt, the objective is always to go into the last day in the hunt, and so we are there right now.”