Palma de Mallorca, Spain (July 31, 2013) – Doug DeVos’ Quantum Racing team moved two more points ahead of Rán Racing at the top of the standings for the 52 SUPER SERIES regatta at the 32nd Copa del Rey Mapfre, their reward for winning a surprisingly challenging but nevertheless interesting 29 miles coastal race out of Palma. 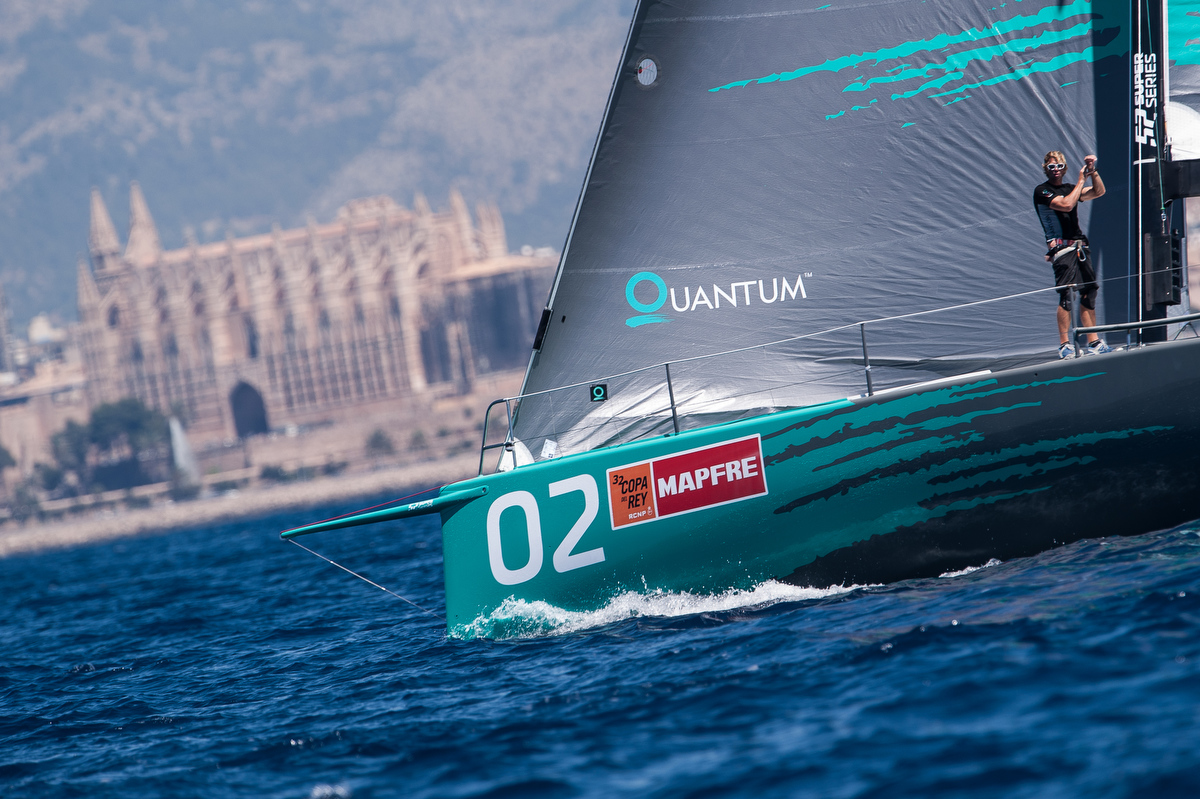 In stiflingly Majorcan hot sunshine the Quantum Racing team remained cool and focused throughout, not least when the fleet compressed during a light airs zone by one of the leeward turns at Illetas. For their hard work and diligence they cashed in a bonus on the long downwind leg from Soll de Mallorca to the finish line off the entrance to the Palma harbour when the breeze moved nicely left for them and they were able to reach directly for the finish line, even popping the long awaited A3 reaching gennaker, to finish well clear of second placed Azzurra.

The American team skippered by Ed Baird, with Terry Hutchinson as tactician, has retained a score line all in the top three and now lead Rán Racing by three points.

Quantum Racing were able to build progressively from a good, solid start moving to the right early to challenge Austin and Gwen Fragomen’s Interlodge which rounded the first mark – at the top of a conventional opening 2.5 miles windward leeward – in a close second.

A subsequent bigger windward leeward circuit saw the 9-12kts sea breeze holding well, but it was as the leaders erred towards the shore off the fleshpots of Palma Nova and Magalluf that the breeze lifted to allow noticeable gains and losses. And early gains were eroded when the wind eased right down at the downwind turning mark at Illetas.

Azzurra, working more offshore, lost out on the first of the longer beats, along with Rán Racing dropping into the lower half of the fleet. But both stuck to their task and took the shifts and pressure changes well to finish second and third. Interlodge, second around the first circuit, finished fourth with Provezza’s fifth keeping them in close contention for fourth overall, three points behind Rio.

Had the sea breeze remained settled throughout perhaps the race might have proven the soldier’s course, a concern which Azzurra trimmer Simon Fry admit worried him early in the piece.
“ It was shifty with the pressure up and down and having two or three more boats makes it more interesting.” Recalled Fry, “It was funny because after about 25 minutes I was worried this would be a soldier’s course with not many chances to pass, but it was a great course.”

The underlying westerly gradient, unusual at this time of year is proving stimulating, according to local ace Jordi Calafat, gold medal winning tactician on Quantum Racing:

“All three days of the King’s Cup so far have seen a different wind pattern to what we have seen for I don’t know how long, with this westerly gradient breeze. Even today there was only ever a very, very slight chance that the breeze would go left at the end of the day and it happened. It was a really difficult day.” Calafat, who won the 31st Copa del Rey last year as tactician with Jochen Schuemann’s team, concluded.

Quotes:
Jordi Calafat (ESP) strategist Quantum Racing (USA): “All three days of the King’s Cup so far have seen a different wind pattern to what we have seen for I don’t know how long, with this westerly gradient breeze. Even today there was only ever a very, very slight chance that the breeze would go left at the end of the day and it happened. It was a really difficult day. That final shift was one of the less predicted scenarios but we do have the advantage here that the Mini Maxi’s start ahead of us so we can keep an eye on them. But it was a difficult race because there was the compression on the second run and that made it very tight again in between the fleet. But in the end the last 20 minutes were comfortable, reaching along. The key was to keep it calm and tight when the compression happened. The normal thing was to extend on the leg up to Andratx because you were going into the stronger breeze and there was a hole at the Illetas mark. We were very scared at the start of the last run in case there was a compression like that last one.

Our goal is to get to the last two days with options to win. Your best days have to be at the end. We can always get better but I think we are sailing very solid racing.”

Simon Fry (GBR) trimmer Azzurra (ITA): “Half way through the race we would have settled for a second. At the start the day we were pushing hard for the win to close the gap on Quantum Racing, but overall we are pretty happy with second for the day.  It was shifty with the pressure up and down and having two or three more boats makes it more interesting. It was funny because after about 25 minutes I was worried this would be a soldier’s course with not many chances to pass, but it was a great course.

And the funny thing is that with the allowance for the A3 then Quantum, Rán Racing and ourselves even got the A3’s on for the finish.”

Niklas Zennström (SWE), owner-helm Rán Racing (SWE): “It was a long day in very hot sun. But it was an interesting coastal race with a lot of opportunities to pass people and be passed. The course here was pretty fun it was much better than Ibiza, it gives a good mix. The first beat we were not so good but hanging in there in fourth, and then worked our way up and a lot of the time we were third. We had a good fight with Azzurra, Provezza and Rio and ended up third. We lost Azzurra on the last run. But the King’s Cup is very much one we want to win, we have won it here before. We are in contention and will just continue to chip away. We are close to Quantum Racing but they continue to sail well. It is going to be hard.”