Cascais, Portugal (October 5, 2013) – The penultimate day of racing in Portugal saw a new name at the top of the leaderboard. As the wind increased, typical Cascais Bay conditions kicked in and local knowledge came into play. There were race wins for Team Cascais-Aleph Racing, Synergy Russian Sailing Team and Team Aqua, local resident, Patrick de Barros scored the least points, but after a consistent performance Team Katusha sit at the top of the leaderboard going into the final day of racing at the RC44 Cascais Cup. 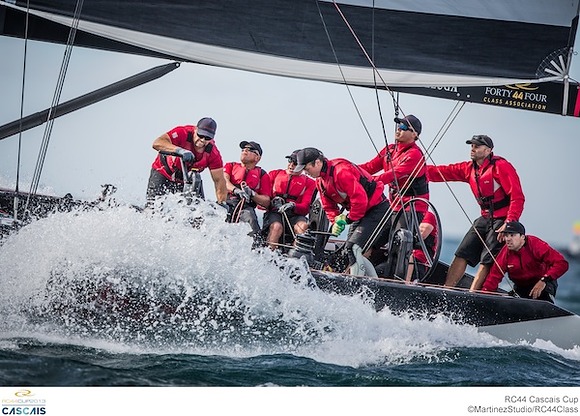 Race one started in 16 knots, Team Aqua getting a good start in the middle of the line along with Team Cascais, Katusha further up immediately tacked off to the right. In the first half of the beat John Bassadone’s Peninsula Petroleum team looked strong having won the pin and headed left, but a shift saw the leaders emerge from the right side of the course. At the top mark it was Team Cascais, steered by Patrick de Barros, who had the edge over Katusha, Team Aqua rounded third but are given a penalty and dropped to twelfth.

Up the next beat Katusha headed left, as they approached Team Cascais and the all-important cross, they opted to tack underneath and onto the layline.  Down the final run the duo split gybes, this time it was advantage Team Cascais who crossed Katusha in the final metres of the race to take the win. Overnight leaders Peninsula Petroleum picked their way up through the fleet to make it to third.

Katusha went for a safe start in race two as the wind increased to 17 knots, staying out of the fight to win the committee boat, tacked quickly onto port and headed right. Once again the pattern emerged, a right shift half way up the beat put Katusha at the front of the pack, Team Italia rounded the windward mark second with Team Aqua in third. Chris Bake’s Aqua continued to chip away passing Team Italia on the second beat and then Katusha on the final run, to take their second win of the event.

Team Katusha had recovered well from the Beluga vodka party the previous night, tactician, Andy Horton gave his thoughts on the day. “It was a nice windy day here in Cascais. It was just awesome the course was a little bit favoured on the right hand side which meant the teams that did well were winning the committee boat or were about a third of the way down the line, getting out to the right hand side and then trying to figure out how to exit out of there. The first two races we had great starts on the right and were going really well the third race we got caught up in the start and were probably about ninth at the weather mark but then started picking off the fleet.” 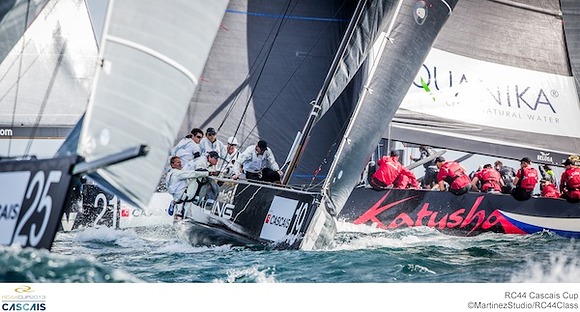 Boat handling was tested in the final race of the day as the breeze touched 20 knots. Team Cascais continued their form, rounding the windward mark first, Synergy Russian Sailing Team just behind. A broach down the final run cost the local team two places, Synergy with Leonid Lebedev at the helm took the win, Team Aqua back on form in second, Team Cascais had to settle for third.

Cascais really did deliver some perfect sailing conditions for the 12 competing RC44s today. Portuguese sailor Patrick de Barros may have been disappointed at losing the lead on the final race of the day, but he wasn’t disappointed with the sailing conditions: “Today could have been better, we were leading the last race but I made a mistake in the gybe, I guess lack of training as I haven’t sailed in a while and probably wasn’t surfing fast enough. But it’s been a fantastic day, I’m delighted today was a typical Cascais day and it showed that it really is one of the best sailing venues in the world with 17-20 knot, nice waves to surf down and the sun was out.”

In the overall leaderboard, Katusha has a six-point lead over John Bassadone’s Peninsula Petroleum, Team Aqua one point off second. Only seven points separate Peninsula Petroleum in second and Team Cascais in fifth, with three more races planned for the final day, no discard, it is all to play for.

Reporting by RC44 class media. Follow the RC44 class for all the latest news and photos: