Cascais, Portugal (October 6, 2013) – Racing went down to the wire in Portugal, the closest RC44 event for many seasons. Five boats were in contention for the top spot going into the final day of racing. Cascais delivered another day of perfect sailing conditions, local sailor Patrick de Barros won the first two races of the day at the helm of Team Cascais – Aleph Racing, but it was Valentin Zavadnikov and Leonid Lebedev’s  Synergy Russian Sailing Team who took the final race to move up from fourth overnight and lift the RC44 Cascais Cup. 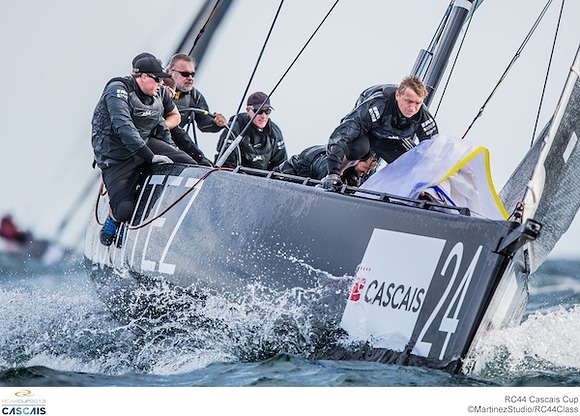 Tensions were high as race one got underway in a building north westerly breeze. With four boats over the line, including Katusha and Team Aqua, the regatta suddenly looked wide open. Team Cascais took their third win of the event, Peninsula Petroleum posted a safe third but the surprise of the day was Katusha and Team Aqua who finished well down the fleet.

With blue skies and over 20 knots of breeze this was RC44 racing at its best. Team Cascais were loving the conditions, winning their fourth race of the regatta and sending them to the top of the leaderboard. Just three points separated the top four teams going into the decider; Team Cascais with 48, Synergy and Peninsula Petroleum tied on 50 and Katusha one point back on 51.

Team Cascais had asked for extra time before the start of the final race to mend their runner, they didn’t sound confident about their chances of fixing it and being competitive for the finale. However they got off the line well and found a lane out to the right. Peninsula Petroleum fought and won the pin end of the line, only to be called over, putting them out of the running.

As the fleet approached the top mark Team Cascais were just below the layline, a double tack, wall of RC44s and a big duck put them back to eighth. Synergy led round the windward mark, Katusha hot on their heels. The pair split at the leeward gate, Synergy headed right, Katusha left. By the final windward mark Synergy had extended, Katusha doing everything they could to hang onto second place and the overall win in Cascais.  As they approached the windward mark they fouled Ironbound and were given a penalty. A quick kite drop and 360 turn saw them split from the pack to try and make up lost ground. 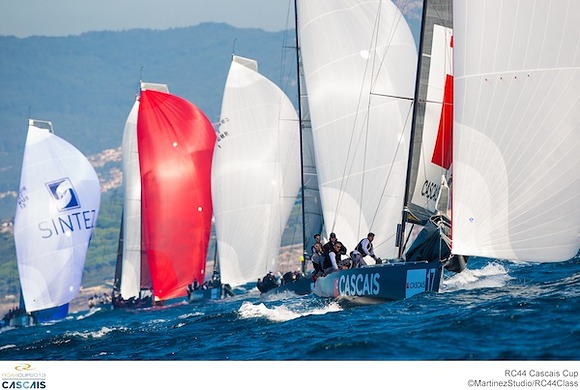 However Synergy was on great form, Maxim Logutenko on the helm standing in for the injured Zavadnikov. The Russian team made no mistakes, extending their lead to take the race win and lift the RC44 Cascais Cup. Katusha came storming in from the right, narrowly missing out on second place to David Murphy’s Ironbound, pushing them back to third overall. Team Cascais never gave up; their fifth place was enough to make them runners up in Portugal.

This is the first ever event win for Synergy since joining the Tour back in 2010, tactician Ed Baird talked through their day:  “In the first race the plan was to go to the right which we did but unfortunately the wind went to the left and we were playing catch up from about eighth to fifth. The second race we had a better start, but one boat tacked in front of us off the line and this caused us to do two tacks off the start, so again we had to try and catch up with the fleet. But the final race we had a really nice start on the left side of the group and tacked across the fleet, Aegir fouled us which cleared the way. The guys did a great job of getting us around the course, the wind got up pretty strong but we were able to sneak out and take the win.”

In the annual standings, Team Aqua stay in control discarding their fifth place in Cascais. After four events each team can discard their worst result, Chris Bake’s team need to finish in the top three at the World Championships in Lanzarote to be crowned RC44 champions for the third consecutive year. Katusha are three points adrift, and will be going for the all-out win in Puerto Calero to snatch the trophy away from the reigning champions.

The final word has to go to local hero Patrick de Barros who stepped back into an RC44 this week after a year away from the class to finish second. “I’m thrilled, it’s been a very successful championship with a very competitive fleet I’m extremely impressed with the level of sailing and how much fun we have had.”

The class now move to Puerto Calero in Lanzarote for the final round of the 2013 RC44 Championship Tour which doubles as the class World Championships from 20 – 24 November 2013.