Virgin Gorda, BVI (February 16, 2014) – Peninsula Petroleum had led the RC44 Virgin Gorda Cup since day one, and for the final day just needed to do was stick with the same format: consistency and staying out of trouble. But the day didn’t go to plan for the Gibraltar based team, allowing Chris Bake’s Team Aqua to snatch victory on the final race of the event.

Racing was again inside Virgin Gorda’s North Sound. As the fleet got underway Peninsula Petroleum were given a red flag penalty off the startline of the day’s opening race, putting them to the back of the fleet. Vasco Vascotto calling the shots for John Bassadone got the team back in touch with the fleet by the second beat. But a port-starboard incident with Gazprom Youth Sailing Challenge, saw the Russian team head back into the dock with a gaping hole in the side of their RC44 and retire from racing. 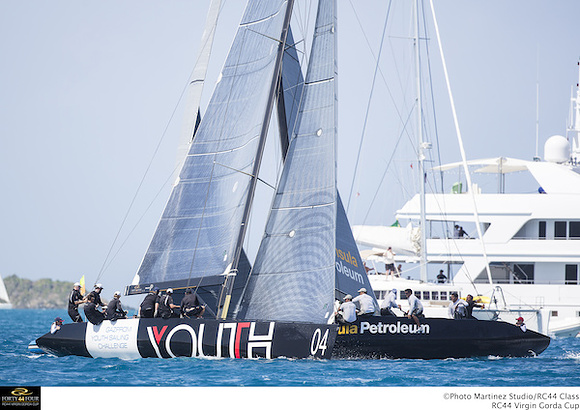 Gazprom Youth Sailing Challenge’s owner driver Vladimir Liubomirov spoke on the dock after limping ashore, “It’s really shifty on the race course today, the lead changing every minute. On the last upwind leg we were in about fourth position, maybe third, sailing on starboard; Peninsula Petroleum were on port, and it was just a classic situation. They couldn’t avoid us and now we have a big hole in our boat, so it is not possible to race for the rest of the day. We lose two races, which for us is not good, but sometimes it happens, it’s all part of racing.”

Peninsula Petroleum fitted a new crash box to their bow and got back onto the race course, but now counting a DSQ (black flag disqualification) and three extra penalty points, putting Team Aqua on equal points with the leaders. Bombarda’s race win, moved the Italian team up, within two-points of the leading pair.

Team Aqua relish a comeback, and having got themselves back within touching distance of the lead, they turned the pressure dial up on their competitors. A safe start in the middle of the line followed a close first beat where the whole fleet approached the windward mark on the port layline. Chris Bake’s team squeezed round in front of Artemis Racing, then led to the finish line. Their main opposition Peninsula Petroleum finished fifth, Bombarda blowing their kite out on the final run, took eighth.

Going into the final race Team Aqua had a four point lead over Peninsula Petroleum with Bombarda and Synergy tied five points adrift.

Neither Bombarda or Team Aqua got the best of starts in the final race. Peninsula rounded the top mark fourth, Aqua two places back. As Lunajets Aleph extended their lead at the front of the fleet, Peninsula was on a charge, up to second by the final windward mark, Aqua trailing in seventh. Down the final run, Aqua went for the early gybe, Peninsula seemed caught up in traffic, losing three places down the run, handing Aqua the win in Virgin Gorda, by just two-points.

Team Aqua have two new crew members this season, the team seem to have gelled straight away.   Owner Chris Bake plans to keep the close knit team together for the whole season. “We’re going to try and keep the team solid, it’s important because when the racing is this close it’s all about the crew work, everyone has to pull together and work well together. Both Jono (Swain) and Simon (Johnson) have stepped into the team and performed really well.” 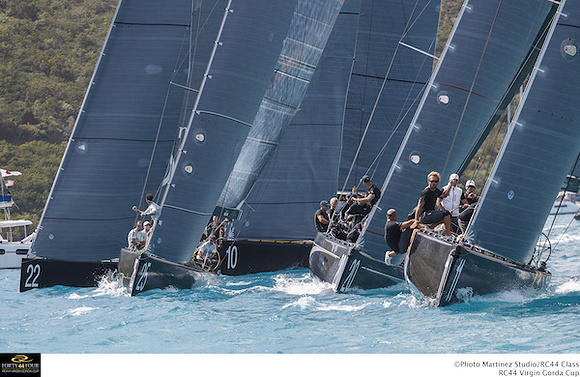 Peninsula Petroleum’s disappointed owner, John Bassadone, summed up his team’s day. “We crashed in to Gazprom Youth; we were bearing away, the main got stuck, didn’t release and we went straight into them. We feel terrible for them because they had to retire and a complete disaster of a day really, especially as we were in control of the regatta with a bit of a cushion. We had a penalty at the start of that first race, got back to fourth position so everything was going well and then one big mistake and we gifted it away.”

The Yacht Club Costa Smeralda has been a perfect host this week in Virgin Gorda, a venue the class will sure be looking to return to in the near future. “Were lucky to be racing here, it’s one of the most incredible places in the. To be racing RC44’s here, they have one of the greatest formats and are one of the greatest classes around; it makes it even more special.” Cameron Appleton, Team Aqua’s match race helm and tactician.

The RC44 class now move back across the Atlantic to Cascais, Portugal for the second event of the 2014 Tour from 23-27th April.