Talamone, Italy (September 21, 2015) – The Snipe World Championship organized by the Sailing Club Talamone could have not started in a better way. Blue skies, crystal blue water, the Islands of Giglio, Elba and Montecristo etched against the horizon served as a backdrop to Day 1 of racing.

The Mistral wind at 13-15 knots for race 1 increased to 17-19 knots for the second race. Ideal conditions for the 83 crews from 18 nations who arrived in Maremma Tuscany to compete for one of the most coveted world championships of international sailing. Borras Camps-Bats Años (ESP) lead the provisional standings with a third and a first.

The excellent organization of the Circolo Vela Talamone ensured that all crews were ready to race on schedule. Once out on the water, the Race Committee presided by Italian Fabio Barasso had its work cut out for the day! The first race that started at 1 p.m. was abandoned due to a notable wind jump to the left. A clear sign that the Mistral was preparing to fill in, as it did later in the day. This allowed competitors to race on an Olympic triangle course sailing between the Argentario and the Maremma National Park. Picture perfect conditions that enhanced the Snipe fleet performance to the max.

Spaniards took the bullets today, as race 1 was won by Raul de Valenzuela and Antolin Alejandre de Oña, who won of the Junior World Champion title three days ago, while Damian Borras Camps and Carlos Bats Años won Race 2. Given the wind and sea conditions, both races were extremely physically demanding. Crews returned ashore exhausted but at the same time exhilarated by the breathtaking sailing conditions on Snipe Bay. 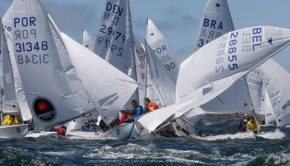 Are we better off now than before? →