Newport Beach, CA (July 31, 2021) – If one just looked at the results of the various stages of the 2021 Governor’s Cup International Youth Match Racing Championship, one would think that winner Jeffrey Petersen of Balboa Yacht Club dominated the competition.

But, for those watching out on the racecourse in the Pacific Ocean off Newport Beach, California, or on the live broadcast of the racing on the GovCup Facebook page (www.fb.com/bycgovcup – watch replays here), it was far from that. Emil Kjaer (DEN, Royal Danish Yacht Club) won the first race of the “first to three” finals against Petersen in what experienced match racers all agreed was one of the best match races they had either been in or seen.

There were five lead changes in that race, but Kjaer led at the last windward mark, having completed three of four legs, had shown particular speed and crew work downwind. After a number of gybes as Petersen attempted to position his boat to disturb the wind on the sails of Kjaer, he did a final gybe within three boat lengths of the finish, caught a wave, and surfed up to Kjaer.

Kjaer’s spinnaker trim was also good, and he prevailed over Petersen by about a foot — as spectators waited for the blue or yellow flag on the Race Committee signal boat announcing the winner. Petersen struck back by winning the start of the second race, and as had been the case all week, was tough to pass once ahead.

Petersen & Co. had excellent boat speed and a very slight edge in downwind sail trim and speed. Kjaer next proved those skills were not important if he could win the start, which he promptly did in race three. And, more importantly, Petersen incurred a penalty pre-start that required him to do a penalty turn sometime during the race.

After catching Kjaer downwind as both boats approached the leeward gate, Petersen took down his spinnaker and gybed on to port, slightly behind and to leeward of Kjaer. Quickly moving into an overlap with his opponent, he almost immediately luffed while Kjaer still had his spinnaker up. At this point, Petersen made a critical mistake.

While luffing is allowed, it must be done so slowly enough that the windward boat (Kjaer) had enough room and time to respond to the luff, including, if necessary, taking down his spinnaker. Petersen got his second penalty as Kjaer’s spinnaker touched Petersen’s rig.

The second penalty to Petersen was signaled by the on-the-water umpires, forcing them to do an immediate turn to absolve one of his two penalties. The race was then essentially over. The score now was 2-1 Kjaer, and the next race was crucial for Petersen.

During the last evening’s press conference with the semifinals skippers, Petersen had said that the score didn’t matter. “We treat every race as if the scoreline is 0-0,” he stated. This proved prophetic as he quickly evened the score at 2-2 with a better start and the same consistent, excellent crew work from Max Brennan and Scott Mais.

During that race, Kjaer and crew made the only real mistake of the day by hitting the windward mark and incurring a penalty, which erased a penalty incurred by Petersen in the same incident at the mark. In doing so, Kjaer became tangled in the mark’s anchor line as Petersen jetted away to a half-leg lead.

The “GovCup” was again to be decided in the final race after almost five days of racing in conditions much breezier than is typical for Newport Beach in the summer — 10-17 knots instead of the usual lighter 6-10. It would appear the five-race final is fast becoming a new Governor’s Cup tradition if the last few Cups are any guide.

David Wood, Balboa Yacht Club’s other contender for the Cup, joined the live commentary team for the final races, and he and co-commentator and two-time GovCup winner, Andy Rose, predicted that Petersen would try to avoid fouls and be sure he had more speed off the starting line than Kjaer for a small lead which he could increase. He did just that, and in one of the largest leads of the finals, won the race and the Cup.

Both Petersen and Kjaer have a rematch coming up in the Youth Match Racing World Championships, also hosted by Balboa Yacht Club with World Sailing as the governing body of the sport. When asked at the post-race press conference, both sailors complimented their competition, six of whom will also sail again in the Worlds.

The other story of the day was the performance of Morgan Pinckney (USA, Newport Harbor Yacht Club). In only his second major match racing series at 16 years of age, Pinckney won the petit final against Porter Kavle (USA, Annapolis Yacht Club) 2-0. Pinckney has improved at an incredible pace from his first race in the U.S Youth Match Racing Championship for the Rose Cup at Rochester Yacht Club in June of this year.

In something of a “changing of the guard” at the GovCup, all the competitors have at least one more year, and both Petersen and Kjaer have three more. (Pinckney has six!) Undoubtedly, Balboa Yacht Club will see them again. The Governor’s Cup is an invitational event for sailors that have not reached their 23rd birthday by the last day of the regatta. Crews of three or four that meet the weight requirement will sail the Governor’s Cup 22 boats designed and built for the event. Racing was held July 27 – 31. 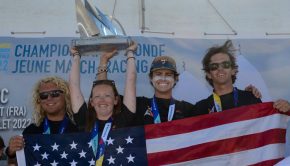