San Francisco, CA (September 18, 2021) – After a last night’s Mount Gay Lawn Party, this morning was a fortuitous time to raise the AP flag, signaling a delay to the start of racing on day three of the 2021 Rolex Big Boat Series at St. Francis Yacht Club.

After two days of 15-20 knots that had sailors raving about the perfect and predictable wind of San Francisco Bay, day three dawned with an uncharacteristic light southerly. Fortunately, the wind filled by 1300 for starts in the J/105, J/88, J/70, ORR divisions, and Express 37s. The Classics started on time, also at 1300, and raced a triangular course in the center of the bay.

“There’s no better racing than when it’s wide open halfway through the regatta,” said Vrolyk, skipper of Mayan and Rear Commodore of St. Francis Yacht Club. “The Race Committee has done a great job choosing courses that highlight the best performance for each type of boat in the Classics division. The fact that the fourth-place boat could still win it shows the Race Committee is balancing the extreme differences between schooners and sloops.”

Today, Vrolyk’s schooner Mayan closed the gap on Yucca during the downwind finish to score the bullet; they are now one point ahead of Kay of Göteborg, with Yucca just two points behind Yucca, in third. Any one of them could win it tomorrow.

“The Classics are using a very simple handicap system, but factoring in currents, wind speed and courses puts them quite close on corrected time,” said Jim Teeters, Offshore Racing Association Technical Director. Among the three ORR divisions, he noted it’s even tighter.

“On the first day of racing, we had the closest finishes I’ve seen. I can’t remember having a race with such close finishes in the top four to five boats, particularly in ORR B,” said Teeters.

Classics and ORR divisions aren’t the only fleets for which every second matters. The J/88s are concurrently racing in their North American Championship, which is what drew Iris Vogel and her boat Deviation to the Bay from New Rochelle, New York.

Though she crewed in one Big Boat Series 30 years ago, she and her crew, all from out of town, have been quick studies of the nuances of San Francisco Bay. “I trust my team. They worked very hard studying the local conditions. We do a lot of travel regattas and the four of us race together all the time.

“My tactician, Dave Coughlin, made great calls, and everyone is key on this team.” She’s watching the other eight J/88s closely, making small changes every day and adjusting to the conditions. “On the first day, everyone kept their big chute up for the second race, but we didn’t. So, we did that yesterday and it made a difference.”

Deviation finished today in second place, four points behind Sausalito-based Gary Panariello’s Courageous, which won the class at the 2018 Rolex Big Boat Series. In third place for the J/88s is Sergey Lubarsky’s Pelagia, another local boat who is a newcomer to the event, though co-skipper Christos Karamanolis has raced previously in the J/105 fleet. “This boat is much more agile. It’s challenging in windy conditions. For us, it’s a great learning experience,” said Karamanolis.

Meanwhile, in the J/105s, a fleet that’s stacked with local talent and known for its intense competition, Ryan Simmons’ Blackhawk is racking up wins, scoring two firsts today and now five points ahead of Tim Russell’s Ne Ne. With one race to go, it’s still up in the air who will win the Rolex Submariner in this class.

In the J/70 division, there was a moment near the end of Race 6 when John Brigden’s J/70 Cool Story, Bro. was under pressure from 1FA, owned by Scott Sellers and Geoff McDonald. However, Brigden defended beautifully and stretched into the finish ahead of 1FA, scoring his fifth bullet and setting him up well for a podium finish tomorrow.

Tomorrow, the final day of racing will feature one longer course for all fleets, typically a wide-ranging tour of the Bay that allows boats who favor long runs an opportunity to stretch their legs. Starting guns will sound at 1200. The trophy ceremony is scheduled for 1600 when three Rolex Submariner Date watches and six perpetual trophies will be awarded, as well as the Express 37 Pacific Coast Champion and J/88 North American Champion. 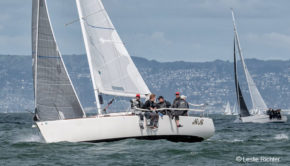