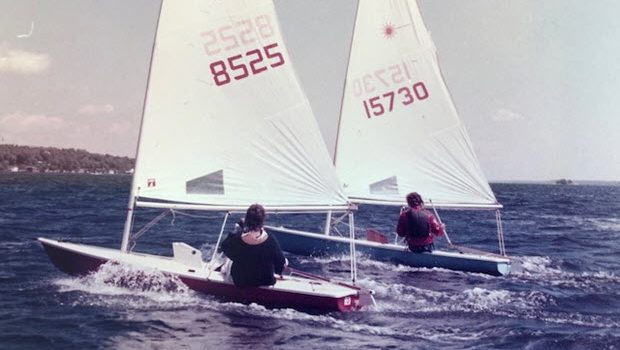 When the Laser boat emerged in the 1970s, it was a gateway drug to the world of sailing. Go anywhere, launch anywhere, race anywhere. Adults and youth sailors alike, it initiated a worldwide generation that continues today.

During the pandemic in 2020, it was the solution to social distancing, with dusty gear finding the water again. And in this era of age-based youth sailing, the Laser offers inter-generational competition, bringing all ages together for learning and living.

Mark Lammens remembered when it all began, and the experience created the foundation in which his impact on Canadian sailing has been profound, earning him the Sail Canada President’s Award for his contributions to the sport.

In this report, Mark shares his 50 years of Laser sailing:

When I was 12 my parents were thinking about getting me a boat. Sailing school was fun and going well in Flying Juniors, so my dad bought the plans to build a marine plywood OK dinghy in our basement.

He was very handy and built a Snipe as our first family boat years back. At the same time. the Laser just came out and was built an hour away from where we lived. They decided to spend the $795 on a brand new red Laser, #8525. The boat was simple, affordable, and fun.

The boat came with a modern name, polypropylene traveler, mahogany blades, a 3.2 oz Elvstrom sail, and Elvstrom ratchet block. It came with a wooden tiller, a short extension, brummel hooks on a clew tie down and system ropes you would see on a keel boat. It also had high quality metal gudgeons and wooden hand rails that never broke.

That summer my instructor brought me to a regatta in Montreal with 210 Lasers. Before long, there were 20 Lasers at the club.

The concept and design came from Canadians Bruce Kirby (designer), Ian Bruce (builder), and Hans Fogh (sail and rig). All three were successful Olympic sailors and saw a need for a boat that provides simple sailing for everyone.

The Laser class rules embraced the one design manufactured provided boat approach to ensure fairness in racing and simplicity, though this might have slowed down the introduction of needed improvements like an auto bailer, metal fairleads, durable sail cloth, and a better ratchet block.

The boats built back then had a wide option of colors like blue, mustard, red, and yellow. Because it was marketed as a roof topper with a 2 part non-tapered simple aluminum mast, lower top sides and 130 pound +/- weight, the Laser could be easily transported on the roof of the big cars of the time.
Although there was a major uptick in singlehanded racing, the boat became very popular with the cottage community as many thousands of them were bought for the weekends on the lake. By the end of 1981, a 100,000 were built.

A big part of launching was having a friend help carry the boat in and out of the water or dragging it up the beach. Marketing the ease of transportation and storage might have delayed the introduction of a portable dolly which came later from Peter Siedenburg, a Finn sailor in Toronto who saw the need and designed the Seitech Dolly.

There was also a wide range of variables like all up weight and mast rake, and it took 15-20 years for some improvements like low profile tiller, thimbles for mechanical advantage on restricted rope systems, and better quality ropes.

The first smaller sail option was called the M rig which used the standard rig bottom section with a shorter top section with a halyard. M stood for Modified or Mini, but it was really a mistake. It was very difficult to de-power when the wind came up as the mast would not bend.

The Radial boat was ultimately named after the radial sail. The sail radiated from the clew and the sail cloth needed to stretch along with the bendy mast to have the mast/sail work together. Pulling on the downhaul to depower was hard on the sail cloth durability. A better longer lasting sail like the new standard Mark 2 sail is still an issue. Sailors that are campaigning in this class have a significant sail equipment expense.

There was another option for younger and lighter sailors, the 4.7. It was designed in 2005 with a much smaller 4.7 square meter sail with an even smaller bottom section. The bottom section has a permanent bend at deck level to ensure the sail is over top of the centerboard for steering balance.

The Class Association was committed to promoting racing, ‘Sailing is Fun’ and the new go fast techniques with the member newsletter. All sailors were new to the boat and an environment of collective improvement and sharing information was the mantra of the class.

Publications such as ‘Beam Reach’ and ‘the Laser Sailor’ had district reports, regatta results, and many tips from coaches and champions to keep the class engaged and informed.

A complicated and contentious patent, royalty, and international availability issue required a boat name change from Laser to ILCA to maintain Olympic status.

In 1996, 25 years after the first boats went into production, Olympic status was awarded for the Laser, followed in 2008 for the Radial. Today the Singlehanded Men’s class at the Olympics is now the ILCA 7 and the Singlehanded Women’s class is the ILCA 6.

The simple, widely available, consistently constructed boat with a two-part mast ensures that racing is testing the ability and fitness of the sailor. As a British journalist once commented on boats, “the Laser (ILCA) is a proper little yacht.”

Perhaps in light of that the class would consider bringing back metal gudgeons, hand rails that don’t break, and design a new longer lasting sail for the Women.