There was once a time when the Annapolis-to-Newport Race was solely the domain of hardened offshore skippers with boats designed specifically for the purpose.

That has changed over the last four iterations as organizers with host Annapolis Yacht Club made a conscious effort to attract a broader range of sailboats. An effort that began in advance of the 2015 Annapolis-to-Newport Race has led owners who would never previously have considered the event to enter and finish.

“Beginning in 2015, the club made a real effort to reinvigorate the race and involve folks who were not the usual suspects for offshore racing,” explained Annapolis-to-Newport Chairman Jim Praley.

“We have done a lot of things to bring in new folks and have refined those initiatives over time. It has succeeded in attracting a much more diverse fleet of race boats. We’re very pleased with the number of cruising-oriented boats that are now entering.”

The 39th biennial Annapolis-to-Newport Race has staggered starts on June 2-3, with the course beginning on the Chesapeake Bay. For the 2023 edition, a new class – ORC Racer-Cruiser – has been added to make the race more appealing.

This inaugural class is designed for boats that don’t fit into the ORC Cruiser class but do not want to race in either of the other ORC classes.

The primary factor that determines eligibility for the new ORC Racer-Cruiser class is sail inventory. For instance, all boats are allowed just two headsails with a sail area greater than 90 percent. Spinnaker staysails and headsails set flying are not permitted.

“Clearly, there is a much broader range of boat owners now willing to undertake the Annapolis-to-Newport Race than there was 15 to 20 years ago,” said John White, Chairman of the AYC Sailing Committee. “I think the ORC rule being what it is has allowed the race committee to fairly handicap a wider range of boats. This race is just much more inviting now.”

ORC Racer-Cruiser proved the ideal landing spot for Alliance, a J/122 owned by Eric Irwin and Mary Martin of Mystic, CT. This will be the first A2N for the New York Yacht Club members and Irwin said simplicity is the watchword.

“Code spinnakers and staysails make crew development and training more complicated for a Corinthian crew that only sails together periodically,” said Irwin, noting that Alliance placed fifth in a class consisting mostly of J/120s and J/122s for the 2022 Newport-to-Bermuda Race.

“When we saw the Racer-Cruiser, it was a natural fit for our program as we focus on keeping things simple.”

Alliance is among two dozen boats that have already registered for Annapolis-to-Newport 2023. Praley, now in his fourth stint as chairman, is hopeful the final numbers will be like 2021 when 82 boats in eight classes competed.

Praley will be among the competitors as he and his namesake son have entered the J/120 Shinnecock for the eighth time. “Annapolis-to-Newport is one of the most iconic and classic offshore distance races in America,” he said. “It offers a unique combination of inshore and offshore elements that make it both interesting and challenging.”

One of the wisest decisions organizers made was to implement a two-day starting format. Starting the slower classes on Friday and the higher performance boats on Saturday has succeeded in ensuring the entire fleet arrives in Newport in plenty of time to attend the prize- giving ceremony, being held the following Wednesday evening.

Doug and Amy Stryker are seeking to become the first owners to complete the Annapolis-to- Newport Race aboard a J/105 one-design. Doug Stryker has entered Mayhem in Block Island Race Week and figured the race would serve as a means of doing the delivery.

“I’ve got to get the boat to Block Island, so I started wondering what it would take to get this boat ready to do the Annapolis-to-Newport Race,” said Stryker, whose team will also compete in the New York Yacht Club Annual Regatta in Newport and the J/105 North American Championships out of Rye, New York.

Stryker reviewed all the safety requirements for A2N to determine what upgrades would be needed to get Mayhem in compliance. He also evaluated all the onboard equipment to include electronics, hardware, and sail inventory.

“We’ve updated all the electronics on the boat and figured out what additional sails we will need,” said Stryker, who has been humbled by the generosity of fellow J/105 owners wanting to assist the campaign.

Annapolis Yacht Club will be conducting a series of their popular “What to Expect” seminars designed to prepare participants for the 475-nautical mile passage. Experts in a wide range of fields such as provisioning, electronics, safety, and navigation will dispense information and advice. 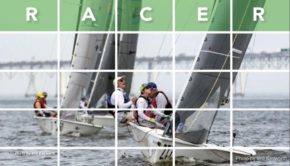 Following, or not, your game plan →