Rescue of the Bounty: Disaster and Survival in Superstorm Sandy

In October 2012, out of New London, Conn., bound for St. Petersburg, Fla., a single tall ship sailed into the path of “the largest storm in geographic spread ever forecast.”

This was Superstorm Sandy, which would soon account for damage in excess of $68 billion (2013 USD), and claim the lives of at least 286 people.

Two of those who died were onboard the 180-foot, three-mast ship HMS Bounty, which sank off the coast of North Carolina after it was caught in Hurricane Sandy.

The National Transportation Safety Board released its findings on February 6, 2014, and now authors Michael J. Tougias and Douglas A. Campbell have released their book, Rescue of the Bounty: Disaster and Survival in Superstorm Sandy, to tell the harrowing story. Here is a review of the book by Kirkus:

“Well…it looks like a big pirate ship in the middle of a hurricane.” The Coast Guard pilot looking down on a churning sea and the embattled Bounty could be forgiven for thinking the scene something out of a movie set. After all, the ship sinking 90 miles off Cape Hatteras was an expanded replica of the famous three-master constructed for Mutiny on the Bounty, and it had been featured more recently in two of the Pirates of the Caribbean movies.

Tougias (A Storm Too Soon: A True Story of Disaster, Survival and an Incredible Rescue, 2013, etc.) and Campbell (Eight Survived: The Harrowing Story of the USS Flier and the Only Downed World War II Submariners to Survive and Evade Capture, 2010, etc.) review the ship’s 50-year history, sketch the backgrounds of the sailors aboard and offer an excruciating moment-by-moment look of the four-day voyage that killed one crew member and the captain.

Relying primarily on sworn testimony from the Coast Guard’s formal investigation, the authors identify a number of factors that contributed to the disaster: a rotting hull, seams improperly caulked, inadequate bilge pumps, a largely inexperienced crew and the lack of any professional weather router.

Culpability, however, rested finally with Capt. Robin Walbridge and his reckless decision to set sail: “The boat’s safer being out at sea than being buckled up at a dock somewhere.” Notwithstanding this huge miscalculation, the authors offer a surprisingly sympathetic portrait of the captain, crediting his compassionate manner and the respect and loyalty he inspired.

Finally, they devote a thrilling portion of their narrative to the courageous Coast Guard rescue and the almost incredible efforts of the pilots, hoist crews and swimmers who headed straight into Hurricane Sandy.

A taut recounting of a needless maritime tragedy. 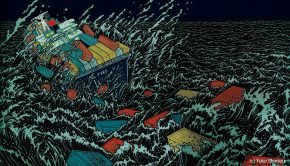 The Medal Maker: A Biography of Victor Kovalenko →