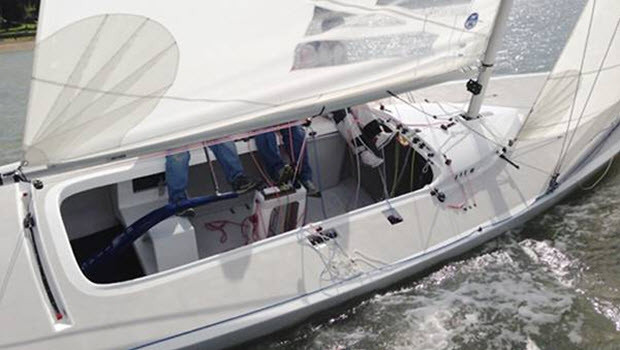 A new era for the Etchells class

In 1965, Yachting Magazine launched a competition to select a new three man Olympic keelboat. E. W. “Skip” Etchells, a boat designer, builder and sailor, produced an entry that outperformed the field, but was passed over in favor of the Soling, which went on to be used in the Olympics from 1972 until 2000.

Despite the early failure, this new boat by Skip would soon attract a following that remains strong today, attracting 95 teams from 12 countries at the 2014 Etchells World Championship in Newport, RI.

A British contingent is seeking to continue the momentum, and have launched what they consider to be a new era for the Etchells class. Robert Holmes explains…

A winter of development work with some of the world’s top sailors has resulted in significant improvements to the latest Etchells keelboats built by David Heritage Racing Yachts in Cowes, UK. “What we’ve done here represents the biggest changes in the class over the past 20 years,” says Andrew ‘Dog’ Palfrey, a double Etchells world champion, Star class Olympian for Australia and veteran of two America’s Cup campaigns.

David Heritage and Palfrey led the project, which included input from another former world champion and Olympian, Stuart Childerley, as well as top international sailors David Bedford, Graham Bailey, Andy Beadsworth and Graham Sunderland. The process started using an existing boat to trial changes to the deck gear and layout. “We all went sailing a lot through those cold and dark winter months and refined the changes to the boat until it was perfect,” says Palfrey.

One of the biggest changes is a mast ram system to replace the low-tech system of mast chocks that was previously ubiquitous in the class. The new system gives an infinite level of control at any time, with adjustments easily made while the crew is hiking. It allows an instant change to the mainsail shape without the crew having to stop hiking.

Another important change is the addition of athwartships tracks for the jib cars that provide fine control of the sail’s angle of attack.

Benefits to existing boats
These deck gear modifications can be retrofitted to existing boats. The mast ram system, for instance, costs less than a new jib, but will last the life of the boat and contributes to a big gain in extracting maximum speed from the boat and making the it simpler and easier to sail well. Other detailed changes that can also be incorporated on existing boats include rope jib halyards with soft shackles and a wider and stiffer tiller.

The latest boats built by Heritage also have a new deck moulding with the main traveller recessed, which reduces friction as the control line has to pass through fewer right angled corners, making it far easier for the crew to move the traveller even in strong airs. In addition, the new position of the jib sheet allows the bowman to hike without twisting his body. There’s also an option for recessing spinnaker lines and control line cleats.

At the same time as optimising the deck layout, the team also worked with designer Hugh Welbourn to optimise the foils. While Heritage built Etchells have always been renowned for downwind speed, the keel entry is now marginally wider to give a bit more bite upwind. The new skeg is thinner, with a finer entry and new moulds have been produced with finer tolerances, so the components all fit together more precisely.

Striving for perfection
Four of the new boats are already on the water, with a fifth in the moulds. All are built to an exceptionally high standard: “Every step of the way David has never skimped on aiming for perfection, allocating all the time and materials needed to produce the best result possible,” says Palfrey. “I have never seen production boats built to such a high level in the 25 years I’ve spent in the class – the only ones comparable are those that owners spend a lot of money and time on optimising themselves. David works to the same level that you see in the Olympics or an America’s Cup campaign.”

One example of Heritage’s attention to detail is the use of a theodolite when stepping the mast. This allows the keel to be aligned with the rig to an accuracy of 2mm at the hounds, almost 9 metres above the deck. In addition, each boat is sailed with its new owner, as part of a package aimed at producing a boat that’s fully optimised when it is handed over. The goal is to produce a boat that the new owner could take straight out and win a world championship.

These modifications will be on several of the 20 boats in the inaugural Etchells International Invitational Cup in Cowes at the end of July. Teams from 14 countries, including several past world champions, will race for the 140 year old Gertrude Cup under the auspices of the Royal Thames and Royal London Yacht Clubs.