The start was delayed as a strong westerly wind, gusting over 30 knots ripped through in the morning but by the afternoon this was replaced by a north westerly wind of about 17 knots. The significant sea state remained, as racing got underway at shortly after 1300 ECT. A coastal course through the beautiful waters of the La Maddalena archipelago was set for all classes.

The first start was for the eagerly anticipated Mini Maxi Racing Class, the strongest fleet in the five year history of the class. Featuring highly IRC optimised yachts of 72 feet and under, the yachts are bristling with top professional crew from all over the world. Most of the teams have been training on the race track for a week and the tension was evident in the pre-start, with yachts jockeying for position, especially at the pin end. After a race lasting three and a half hours, less than four minutes separated first from last after time correction.

Andres Soriano spoke dockside after the finish. “It’s only the first race of what I am sure will be a highly competitive series but I was delighted how well the boat performed today. The wind forecast showed 20 knots or more, so we went with the smaller main and to get to the top mark first was an excellent performance. In this fleet, getting there first is always a top priority. Rán and Robertissima were just behind us, but got into a one-on-one, and had to tack to make the turn. With our spinnaker up, we were just gone. However, the fleet came back at us on the run back and that is always expected with this quality of competition.”

“Whilst there have been slightly larger fleets racing in the past, I don’t think we have had a more spectacular fleet than this year. First of all we have never had a fleet of five J Class yachts and and we have the most competitive world championship for the Mini Maxi Class there has ever been.

“The Wally class is also very strong” continued Claus-Peter Offen “with the two Wally Centos and many other well sailed yachts, so it will not be easy for Y3K to win the Wally title back, but we are working on it. The crew have been training to improve manoeuvres and sail handling. Also we have made some technical modifications such as a flat head main and a deeper keel. Part of the fascination for me is to see how we can increase the performance of the boat and we have to, because there are new boats coming to race and if we do not improve we will not be able to keep up with them. I think there is great expectation for a tremendous week of racing.” 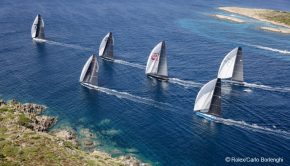 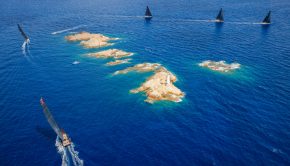 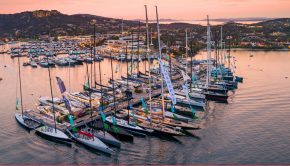