San Pedro, CA (May 28, 2015) – It was a slow start for day two of the Farr 40 West Coast Championship, as light winds delayed racing before the seabreeze came in to allow for three more races to be completed. After reigning world champion Alex Roepers’ Plenty won the first race, Martin Hill’s Estate Master took over to win the second and third races to now lead the event. Hosted by Cabrillo Beach Yacht Club, up to 11 races (no discard) are planned as racing continues through May 30.

Report by class media:
Quantum Sail Design Group Day at the Farr 40 West Coast Championship proved quite interesting. Principal race officer Peter Reggio held the 15-boat fleet at the dock for an hour then delayed for another hour out on the water waiting for the sea breeze to fill in.

For the sailors, the wait was well worth it as things got wild once racing finally got underway. Southwesterly winds that steadily built to 15-17 knots provided some thrilling competition and resulted in a shakeup in the standings.

“After a long pause to get going, the day ended with a real vengeance,” Groovederci skipper John Demourkas said.

“When the wind came up to Hurricane Gulch standards, it turned into a really fun day,” said Foil skipper Gordon Leon, referring to the nickname for the race area off Cabrillo Beach. “San Francisco has nothing on us!” Estate Master, the Australian entry owned by Lisa and Martin Hill, reveled in the big breeze in posting a pair of bullets on Thursday at the West Coast Championship.

It was a big afternoon for the Estate Master team led by the husband-wife duo of Lisa and Martin Hill. Tactician Ian Williams had the hot hand as the Australian entry posted back-to-back bullets to close out a tremendous day on the water.

Estate Master, making its season debut on the International Circuit, displayed superb boat speed and excellent crew work in also posting a third on Thursday to vault from a three-way tie for fourth place into the overall lead with a low score of 19 points.

“It was a great day on the water for our team and we are very, very happy,” Martin Hill said. “We can’t get too carried away because we still have plenty of things we need to improve, but we saw light, medium and heavy breeze today and we feel very comfortable in all conditions.”

Racing got underway around 3 p.m. in 8-10 knots with the second start beginning in winds ranging from 12 to 15. It was howling in the upper teens by the time Race 3 started on the Pacific Ocean, making sail changes and maneuvers a challenge.

“With the wind shifting right and a counter eddy in play, it was very difficult to call the laylines. A lot of boats overstood some of the marks,” Hill said. “Ian Williams really showed his skill at starting, calling shifts and reading laylines.” Annapolis skipper Kevin McNeil and his Nightshift team posted a solid score line of 2-5-8 on Thursday and are fifth in the overall standings after six races .

Groovederci chased Estate Master around the course in the fifth and sixth races and secured consecutive runner-up results to move from third to second in the overall standings – five points behind the leader and five points ahead of Enfant Terrible (Alberto Rossi, Ancona, Italy).

“We had two good starts, which set us up well, and then we went the right way,” Demourkas said. “We’ve put ourselves in pretty good position at the midway point in the regatta, but you can never count your chickens in this class. You can go from the penthouse to the outhouse in a hurry.”

Demourkas came away impressed with the capability of Estate Master, which was runner-up at the 2014 Rolex Farr 40 World Championships. “Estate Master is very quick and their crew certainly showed they can handle the big breeze,” he said.

It was a bittersweet day for skipper Alex Roepers and his team aboard Plenty, the reigning International Circuit and world champs. Plenty repeated its performance from the opening race of the regatta by leading around every mark en route to getting the gun in Race 4. That second victory of the regatta briefly gave the New York boat the overall lead, but a Z Flag penalty in Race 5 resulted in a disappointing 14th place. Plenty rebounded with a fourth in Race 6 and stands fourth overall via tiebreaker over Nightshift (Kevin McNeil, Annapolis, MD). 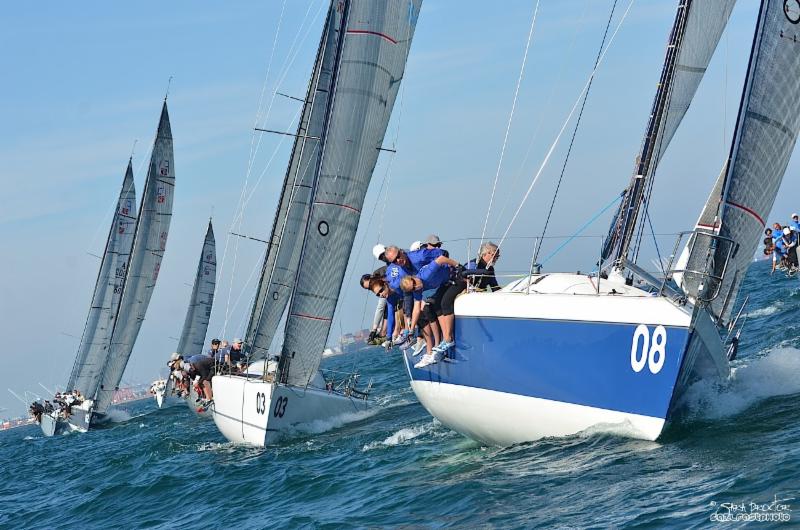 Gordon Leon won the day within the Corinthian Division, steering Foil to finishes of fourth and fifth to close out the day. Scotty Dickson is calling tactics for Leon, a Cabrillo Beach Yacht Club member whose local knowledge shone through on Thursday afternoon.

“As the wind builds it tends to move right and we were definitely in phase during the last couple races today,” Leon said. “It was nice to see everything come together. We ironed out some crew issues and just settled down on the boat. We were able to sail quietly and focus better.”

Foil moved into third place overall among Corinthian entries behind fellow California boats Insanity (Rick Goebel, San Diego) and Blade 2 (Michael Shlens, Palos Verdes). Blade 2 had a nice day going after posting results of eighth and third, but was forced to retire prior to Race 6 with a torn mainsail.