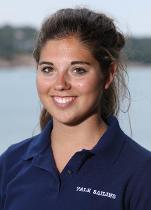 Newport, RI (May 28, 2015) – The Quantum Women’s Sailor of the Year was announced during an awards presentation at the Sail Newport Sailing Center, hosted by Salve Regina University, after racing at the College Sperry Women’s National Championship.

The college finalists this year were Erika Reineke (Fort Lauderdale, Fla.), Boston College ’16 and Morgan Kiss (Holland, Mich.), Yale University ‘15. Both of these sailors have had an incredible year of competition and it was a tough decision for the committee to name the winner.

“We had two incredible finalists this year with amazing records, both were national champions and both were at the top of A-division all year,” says John Vandemoer, head coach for Stanford University and a member of the ICSA All-America committee.

Both Reineke and Kiss were finalists last year for this honor. Reineke won the 2014 Women’s Singlehanded National Championship and has consistently competed in the top of the women’s fleets throughout the 2014-15 season.

Kiss won A-division at a number of women’s regattas over the course of the 2014-15 season and just won the 2015 Sperry Women’s Nationals with her team, and won A-division in the event with Emily Johnson ’16 and Claire Huebner ’18.

This year’s Quantum Women’s Sailor of the Year is Morgan Kiss of Holland, MI. Kiss attributes her parents to getting her involved with sailing when she was 10 years old and she sailed Optimists on Lake Michigan.

“Morgan had an amazing nationals run and an amazing year, congratulations to her and the whole Yale team,” Vandemoer says.

When it came to sailing in college, Kiss says she was fortunate to select Yale University.

“Yale was attractive for its academics and it has a great sailing team,” she says. “Zack Leonard and Bill Healy are fantastic coaches, I have had great teammates and there is a great tradition at Yale with alumni who are supportive and come back to help us,” she continues.

Kiss graduated from Yale this spring with a degree in biomedical engineering. She plans to move to New York City and work in healthcare consulting. Kiss also says she hopes to continue sailing after college and aims to get into team racing on the east coast.

The Inter-Collegiate Sailing Association (ICSA) is the governing authority for sailing competition at colleges and universities throughout the United States and in some parts of Canada.