Bill Sandberg shares this story in the October 2015 issue of Spinsheet magazine, the publication for boaters and sailors of all levels on the Chesapeake Bay…

In both 2013 and July of this year, I had the honor of being the Principal Race Officer (PRO) for the CH Marine Glandore Classic Regatta in West Cork, Ireland. The event features all sorts of classic Irish yachts including Galway Hookers, Menai Straits Fife one designs, and a 1915 Falmouth Punt Teal. It also features one designs such as Dragons, Fifes, Squibs, Ettes, and Colleens.

The highlight of my trips has been the kids of Glandore Harbour YC (GHYC). There is nothing fancy about the clubhouse. There are no employees; the members do everything, including all the work to gut it and fix it up.

The GHYC junior program runs more than 200 kids through it—from one to six week programs. Rather than drill after drill, the accent is on fun first and racing second. They capsize (the water in Glandore is no jacuzzi), have water fights, run into rocks, and take picnics to Stone Beach across the harbor and BBQs to Rabbit Island. And they laugh all day long.

The program is run by Karen Horgan, who is truly a phenomenon. She is also vice commodore of the club and on the sailing committee for the classic, and she works, too. Oh, and did I mention she has three nice teenage children?

This is not to say that they never race, but that is not the key. Nice is the key word when describing the junior sailors of Glandore Harbour. The kids treat each other with respect. There is no “tude” with adults—their parents or otherwise.

Parents are involved in the program, but in a constructive way. Each day, there are several parents wearing their “parent of the day” vest. They are not the helicopter parents found in too many places in the United States. Nor do they spend the day haranguing the instructors.

Because the Classic benefits the junior program, the kids are expected to pitch in and help in a number of areas. They are up early making sandwiches for the racers, ferrying competitors to their boats, running the mark boat, and serving on the signal boat. Each day

I don’t mean to put down junior sailing as a whole in the US, but for those who run junior programs, ask yourself one question: “Why do we have 50 or more Optis and only five Lasers and four 420s?” The answer is pretty clear. The kids are not having fun. There are too many other things they can enjoy without adding stress to their overstressed lives.

Will the kids of GHYC win Olympic medals or sail in the America’s Cup? Not likely, but when they’re 50, I bet the majority of them are still sailing. There is a message here for those who want to listen. 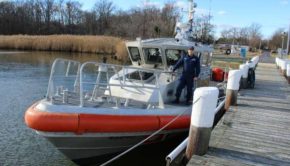