Initially today looked dubious with the wind forecast to veer from northeast to southwest leaving a large wind hole in the Bay of Palma. In fact, the 180° shift occurred earlier allowing the sea breeze to build to 14-16 knots for the final races, enabling the nimble GC32s to hit speeds of 30 knots.

Following their disappointing opening day, Team Tilt’s crew was in fighting mood, winning today’s first two races by a considerable margin. However their run of victories was halted by NORAUTO, which won the next two, before the Team Tilt ‘comeback kids’, led by Alinghi’s Arnaud Psarofaghis, resumed their winning streak in the day’s final two. Team Tilt won six of the 12 races here, but a couple of deep finishes meant they were unable to catch NORAUTO and ARMIN STROM Sailing Team.

Despite this being Minoprio’s first occasion helming on a GC32 Racing Tour event (although he won the GC32 Alps Challenge Traunsee in May) and despite two last minute crew challenges, NORAUTO claimed 35 Copa del Rey MAPFRE with a seven point margin.

Ashore Minoprio was kicking himself from a tactical error he’d made in today’s first race, resulting in a seventh-placed finish. “We gave Tilt and ARMIN STROM a good shot at winning the regatta and put a lot of pressure on ourselves. But we sorted that out and came back.”

Minoprio was especially pleased to have kept his fellow Kiwi match racing rival, Phil Robertson, behind him, Robertson steering ARMIN STROM Sailing Team in place of Flavio Marazzi: “I am very happy with how it went. We had a thrown-together crew with a few injuries, so to come together and win was a great result.”

With wind and sea state having built for the final race, there were a few incidents including NORAUTO nearly capsizing during a swift manoeuvre to avoid a collision.

Similarly Pierre Casighari’s Malizia – Yacht Club de Monaco was leading the final race, but came close to capsizing at the leeward gate. Fortunately, his GC32 came back from the brink and they sailed on to fifth place.

“We had a close one coming out of the gybe,” admitted Casighari. “We had a problem with the main and couldn’t bear away, so we lost our good start there, which was a shame.”

Casighari was overjoyed to have got in a full race day. “We had a lot of fun. We had the whole range of conditions and in the end it was fast. Everyone is really good now in the fleet and it is fantastic to race with them. I think the GC32 is the best boat in the world and the best class ever created in the history of sailing. Anyone who doubts that just has to come and race on it.”

Jason Carroll’s Argo finished the last race second, but this was not enough for the US team to prevent Casighari’s team from claiming the GC32 Owner-Driver victory at Copa del Rey MAPFRE. The closeness of this competition was evident in the final race when Malizia – Yacht Club de Monaco, Argo and Naofumi Kamei’s Mamma Aiuto! rounded the weather mark in the top three positions.

“It was a super fun day, perfect conditions for us,” said Carroll. Argo’s closest calls of the day were during mark roundings: “We had a boat that thought it had buoy room and didn’t and ended up getting red flagged at the leeward gate. It’s a little scary, because you’re going very fast into the leeward mark…”

Argo remains leader in this season’s overall Owner-Driver ranking. Behind them is Mamma Aiuto! while GC32 Founder, Laurent Lenne brings up the rear on his Orange Racing.

Lenne felt he had been hard done by during a couple of protests during the final race, but still managed to finish fifth, his top result here. “Over the whole event we are quite happy, because we’ve improved, but everyone is improving at every event,” he says.

His first race today was scuppered when he was deemed to have been over early at the start and Orange Racing was further hampered in the second race when a plastic bag got caught in its rudder for the majority of the race. “After that it got better and better,” said Lenne.

Racing on the GC32 Racing Tour now moves on to Sotogrande, Spain for the fourth event of the season – La Reserva de Sotogrande Cup over September 22-25.

Overall results after three events on the 2016 GC32 Racing Tour 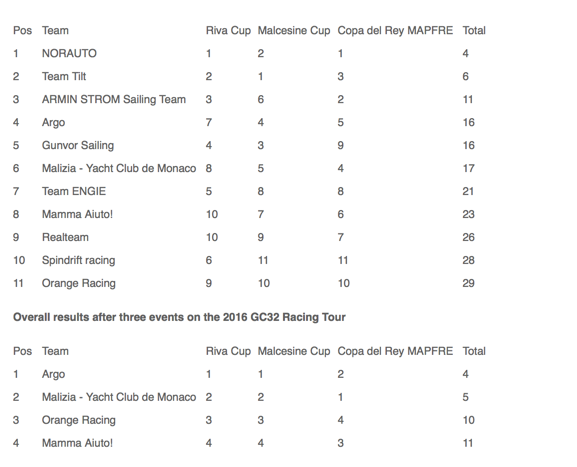