The inaugural U.S. J/70 Youth Championship will be taking place from August 11 to 13, hosted by Sail Newport in Newport, RI. Nine teams are participating from across the country, including teams from California to Maine, and from northern Michigan down to southern Florida.

The teams qualified by sailing in major regattas across the country, including many of Sailing World NOOD Regattas in San Diego, Annapolis, Chicago, and Marblehead. Notable about many of the youth teams were their performances against some of the top J/70 teams across America, many finishing in the top half of large “open” J/70 events that included some of the world’s top professional sailors in the J/70 class (many of them Olympic Medallists and World Champions in various classes).

The teams qualified for their sailing clubs in the hopes of winning one of the most unique prizes in the world of sailing – a FREE use of a J/70 for their sailing club for an entire twelve (12) months! The boat will be free to use for the youth keelboat program, for members to race in J/70 events, to introduce women sailors to the easy-to-sail J/70, etc.

From the West Coast, the sole representative is the Santa Barbara YC from Santa Barbara, CA. From the Midwest is the Little Traverse YC from Harbor Springs, MI. There are two teams from Florida: the St Petersburg YC in St Petersburg, FL and the Coral Reef YC from Miami, FL. From the Chesapeake Bay are two teams: the Annapolis YC from Annapolis, MD and the Severn Sailing Association from Eastport, MD. Finally, from the northeast are three more teams: Eastern YC from Marblehead, MA, MudRatz Sailing Club from Stonington, CT, and Sail Newport from Newport, RI.

The racing format will provide short-course, college-style “stadium sailing” on Newport Harbor between Goat Island and Rose Island just south of Newport Bridge. Onshore at Goat Island is an enormous, New England-style, open-air pavilion to watch the racing taking place in front on Narragansett Bay. Up to 27 races are planned with each one taking just 15-20 minutes each.

The weather forecast is promising, with mostly southerly winds, sunny skies, and between 8 to 15 knot winds each day.

This event can only happen with the help of some amazing people and sponsors. For starters, “thanks” to Bob Johnstone’s MJM Yachts for providing the winning prize- the J/70 for FREE use by a sailing club for 12 months. If some sailors might recall, Bob J. was responsible for starting the first U.S. Youth Championships in Wilmette, IL back in 1973 in both 470s and Lasers. Many of the world’s top sailors today were participants in those first three years in Wilmette- including Augie Diaz, Carl Buchan, and Peter Commette.

In addition, Peter and Olaf Harken from HARKEN in Pewaukee, WI are significant contributors to the “youth movement” in promoting their “Blockheads” sailing program for youth teams.

North Sails is providing sails for the event, thanks to past 5x J/24 World Champion Ken Read, President of North Sails and Tim Healy, Chief of the One-Design Division. Ed & Becky Furry’s SAIL22 is providing regatta support as well as their J/70 as one of the provided boats for the regatta. Ben Klatzka’s PREMIERE SAILING LEAGUE is a supporter and has promoted J/70 sailing league programs in the USA, including Grosse Pointe YC’s “stadium sailing” events in 2017. 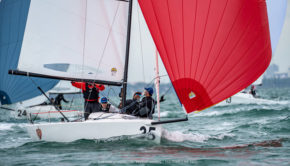