May 9: Leg 4 – Daytona Beach, FL to Jacksonville Beach, FL (approximately a 77 mile leg)
Excitement was high on the beach at Daytona, as all 3 boats were set for an on-time start, as late-night repairs to team TCDYC’s boat were completed with the help of the Aussies and Team Cat in the Hat. It would be the first time since Leg 1 that all competitors pushed off at the sound of the final horn.

The forecast promised champagne sailing: 10-15 knots building throughout the day, sunny and warm. The surf at the start was nothing these veteran sailors couldn’t handle. The start from the previous morning had the Race Leader, Team Australia, delay their start at the horn to watch how team Cat in the Hat made it through. Not today – Both teams shoved off in a furious scramble with their ground crews shoving them through the first few layers of surf. But what about TCDYC? They opted for a 3-minute delayed start, not eager to push the freshly fixed boat. But – a 3-minute delay is far better than the 47-50 minute delays of the last two starts. They were all, kites up, on their way.

The race PRO drove the coastal road instead of the 95 – A few stops were made, as the racers could be clearly seen at a few points along the way. It was an appreciated effort by the FaceBook followers – additional Live Feeds meant more time to live vicariously through the “lense”.

At Jax Beach, the race committee had just enough time to set the finish line when the lead boat, Team Australia was spotted in the long eyes. It didn’t take long for them to arrive – their official elapsed time was just 5:07:41. Rod Waterhouse reported clocking speeds of 20 knots at one point – He and his Crew Bo were nothing but smiles – it was indeed, a champagne sail. Not far behind, Team Cat in the Hat landed with an elapsed time of 5:42:31 – they keep narrowing the gap with each leg. As for TCDYC – they again arrived with a port hull full of water, so the building breeze helped them make an elapsed time of just 6:52:11 – not bad when you consider the tremendous extra weight being carried in the port hull. With the beach emptied to help them roll the boat up away from the surf, Brett White from Team Australia laid on the ground under the lifted hull – they could see the breech. They knew what they were doing again tonight.

As of the writing of this piece, all of the sailors are on the beach, the TCDYC boat on its side, drained, dried and work commencing. From my vantage point here on the 7th floor, looking down from the balcony – I can see the beers in their hands, the laughter and the easy feel of their demeanor and I know, again – the comradery of all the sailors in this event is palpable, and, I believe – Life Long.

The Race committee is considering an earlier start for the next leg, as the forecast shows very light winds and the leg is long – almost 120 miles to Tybee Island, GA. The racer’s safety and the likelihood they could finish before dark are the main factors. The decision will be made before morning. 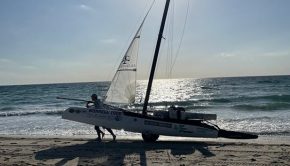