Cedar Point, NY (August 17, 2019) – The 91st Atlantic National Championship was held at Cedar Point Yacht Club from August 15 to 17. Clear winners in the fleet of 27 boats were David Peck, Tom Peck, Diane Peck Rothman and Bill Healy from Niantic Bay Yacht Club, aboard Miss April. They won four of the six races, throwing out a fifth.

In second place was Steve Benjamin in Cassidy, a constant threat as always, and third Rodrigo Meireles with Èlan. Conditions were almost as good as it gets on Long Island Sound, with light to moderate easterlies.

It must have been sweet for the Pecks, who have been narrowly beaten by Benjamin at recent Nationals, last year on a tie-breaker. This time Miss April seemed to have a little something extra in speed and pointing ability. Rodrigo Meireles, sailing his first Atlantic Nationals as skipper, was very consistent, as was Scott Reichhelm in Shucks who finished close behind in fourth. These were the first two of a big Cedar Point contingent, numbering 14 boats, the entire club fleet.

A memorable moment came when Tom Davidson, from Madison, arrived at CPYC the morning of the first race to find Magic had sunk overnight at the dock. The electric pump hose had been left hanging overboard with its end in the water, and a siphon effect had filled up the boat. After a slick lifting operation the boat was recovered, and Tom bounced back with a seventh in the first race the next day. 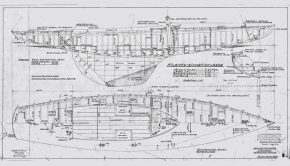 Birth and survival of the Atlantic class → PHOTO: Liking the low side →