When parties and racing compete

The Melges 24 was groundbreaking when it hit the water in 1993, and now remains timeless as a sportboat that’s fun, easy to rig, sail, and tow. However, one design classes can have ebb and flow, and when the cost to compete went stratospheric, the fun ebbed.

But the boats remained fun, and when the resale market offered affordable listings that got picked up by the lunchbox crowd, the reboot provided class racing with an influx of new life.

How long the baseline of commitment stays within reach is anyone’s guess, as paying for top crew can still deliver top results, and with the 2020 Worlds coming to the USA, the madness meter may rise again.

But for now, it is good times, and as has been preached in the pages of Scuttlebutt, nothing promotes good times like fun regatta formats. And when it comes to fun, the sailing community along the Gulf of Mexico do it pretty well, as this report by Talbot Wilson details:

It was in mid-November when there was a party at Pensacola Yacht Club (Pensacola, FL) and a Melges 24 regatta broke out.

The idea was the brainchild of PRO Hal Smith, a professional race manager on the Melges 24 circuit. He is also PYC’s Fleet Captain. Tom Pace Jr signed on as regatta Chairman. He pulled together a great group of volunteers to deliver the racing and hospitality we are known for.

The inaugural Bushwhacker Cup Regatta was born… which may or may not have been named after the creamy, boozy milkshake popular in the region.

Hal was a fixture at Key West Race Week. He has run the Melges 24 circle at Charleston Race Week for many years. He was PRO for the 2019 Melges 24 US Nationals in Fairhope, AL. With Hal running the races, we knew we had great leadership on the water to promise fun, fair racing.

Tom has been PYC’s ‘big event’ chair since the 2018 Optimist US Nationals. With five one-design championships to his management credit, he now has an event play book. Tom knows how to coordinate the shore operations, racing, food and fun… the essentials for a great regatta.

The plan was to deliver a three-day experience for 20 of the 23 entered boats that made it through the bad north’s cold-front weather. Crews included two America’s Cup Skippers, US and Canadian national champions mixed with a slew of exceptional amateur sailors.

Friday was registration, boat launching, a practice race and a Melges 24 dock-talk clinic with Zane Yoder for Quantum Sails. Hors d’oeuvres and an open Bushwhacker bar followed after the competitors briefing. Or did the bar open before…

With a dismal forecast on Sunday, racing on Saturday got underway early and ran late. Hal Smith and team clicked off five races in five hours. The wind was 10-12, a shifty northerly blowing through downtown Pensacola. The wind-driven tidal current was flowing out of Pensacola Bay. It was a challenge, but the goal was to get in what we could.

Sunday’s forecast of 0-2 knots came true. The fleet got one start off but the ‘0’ came fast and the fleet was drifting back towards the start. Smith abandoned quickly and the fleet went back in and hoisted their boats quickly and retired to the clubhouse for another party… burgers, beer, and bushwhackers for all. Booty for the winners.

Melges 24 class racing is alive and well in Pensacola… practice, five races, prizes, and three parties. Plan ahead for 2020. A tentative race date— awaiting class approval— has been set for Nov 13-15. 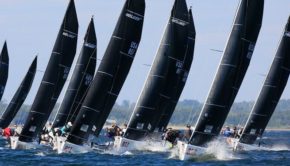