Made in the Pacific Ocean

The Great Pacific Garbage Patch is a collection of marine debris in the North Pacific Ocean between Hawaii and California with an estimated surface area of 1.6 million square kilometers. Contained by ocean currents, this equates to an area twice the size of Texas or three times the size of France.

The good news is all this marine debris is corralled but the bad news is it’s a massive amount of waste that accumulates because much of it is not biodegradable. Many plastics do not wear down; they simply break into tinier and tinier pieces.

So while we can be better citizens on how we treat the ocean, cleaning up this mess remains a priority. While its presence poses risks for the safety and health of marine animals, there are health and economic implications for humans as well.

As a result, just because we don’t easily see it, we are feeling it.

Addressing this situation has been the mission of The Ocean Cleanup, the Dutch non-profit organization which had launched a 600-meter plastic-sweeper to clean up the notorious floating Great Garbage Patch.

The gigantic ‘pac man’ system was launched from San Francisco Bay on September 2018, and after several ups and downs it was confirmed in in October 2019 that the system was capturing and collecting plastic debris, from massive ghost nets down to microplastics one millimeter in size.

With the first mission completed, and the sweeper now back on land, The Ocean Cleanup organization shares this update:

The first batch of ocean plastic has been brought to shore following their first mission in the Great Pacific Garbage Patch. The haul amounts to 60 1 m³ big bags with the plastic, of which the majority of it is anticipated to be suitable for the transformation into suitable products that will be sold to help fund the continuation of the cleanup operations.

To confirm the origin of these future plastic products, The Ocean Cleanup has worked with DNV GL, an international classification society, to verify plastic that is removed from the ocean.

End of Mission One
The purpose of The Ocean Cleanup’s first mission in the Great Pacific Garbage Patch was to confirm the concept of passive plastic collection by means of the natural forces of the ocean.

Since the launch of the first cleanup system, System 001, in September 2018, most items on the long list of deliverables for the technology could be checked one-by-one. Early reports showed, however, that System 001 was not retaining plastic as it should, and despite attempts to remedy this and successful design confirmations, the system suffered a fatigue fracture, resulting in a need to return the system to shore in January 2019.

The engineering team performed a root cause analysis, redesigned a modified system, and, in record time, The Ocean Cleanup deployed the upgraded system, System 001/B, in June 2019. After several months of trialing modifications, the concept’s ability to capture plastic was confirmed.

From Pollution to Product
The Ocean Cleanup has, from its start, planned to create a value chain on the basis of their collected debris, with the aim of funding continued cleanup operations. The Ocean Cleanup has confirmed its intention to develop attractive, sustainable products made from material collected in the Great Pacific Garbage Patch. The return to shore of the first plastic catch marks the beginning of this journey.

As this will be the first time it will be attempted to produce products fully made from plastic taken out of the ocean, the road ahead for the catch is likely going to be a challenging. If all goes well, the organization expects to launch this premier product made from material collected in the Great Pacific Garbage Patch in September 2020. Details of the product, pricing, and quantity are also set to be announced at this time.

“Welcoming the first catch of plastic on land is the moment we have been looking forward to for years,” reports Boyan Slat, Founder and CEO of The Ocean Cleanup. “I believe we can use this trash to turn a problem into a solution by transforming this unique material into a beautiful product.

“As most people will never go to the Great Pacific Garbage Patch, through these products, we aim to give everyone the opportunity to take part in the cleanup.”

Verifying Ocean Plastic
Currently, it is not compulsory for an independent, third party to verify that materials have been sourced from the ocean, and products labeled as “ocean plastic” may not be entirely sourced from the ocean. To add further transparency to their work, the origin of the material used in The Ocean Cleanup’s products will be verified by DNV GL, a leader in industry certifications.

Over the last year and a half, DNV GL has been developing a standard that allows the highest level of traceability possible, clarifies how ocean plastic is defined, and will bring transparency to this fast-growing market.

This new standard will be open to all parties interested in ocean-plastic product certification and will ensure that the origin of recovered plastics is defined and verified, allowing consumers to have trust that the product they are purchasing was made from material removed from the ocean.

“Building trust through standards and independent verification has been DNV GL’s work and mission for more than 155 years,” explained Luca Crisciotti, CEO of DNV GL-Business Assurance. “Our objective has always been to address challenges at hand, contributing to safer and more sustainable outcomes in a transparent way.

“When purchasing products verified by DNV GL, consumers can fully trust that it is an ocean plastic product and that they are contributing to the solution.”

System 002 and Looking Towards 2020
With the conclusion of Mission One, The Ocean Cleanup has begun working on their next system, System 002. The aim of this new design is to create a full-scale, fully operational system.

The engineering team has initiated the development phase by addressing the essential remaining design challenges – long-term durability and sustained plastic retention – and will test updated features, once completed. System 002 will be a key steppingstone to full scale cleanup of the Great Pacific Garbage Patch.

A date of deployment is not yet set as its completion is dependent on fulfilling these many factors. 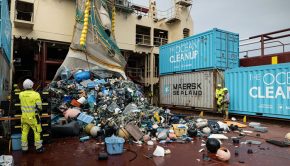