Newport, RI (August 1, 2021) – Five years of turning losses into lessons and building a consistent, cohesive team paid off today as Corinthian Yacht Club of Marblehead, Mass., won the 2021 Morgan Cup. The New York Yacht Club Invitational Trophy for the Morgan Cup. which is one of keelboat team racing’s most respected and competitive events, was sailed out of the New York Yacht Club Harbour Court, July 30 – August 1.

After three days and 117 races. the 17th edition of the regatta came down to tie-breaker between two clubs located within a stone’s throw of one another on Marblehead Neck. Corinthian Yacht Club and Eastern Yacht Club finished the regatta with identical 17-7 records. Based on the 3-1 advantage in head-to-head races, Corinthian took the championship, becoming the sixth club to win the prestigious Morgan Cup. “We’ve been here four times before as a team, and all the people on our team have sailed the event before,” said Corinthian Yacht Club team captain Will Bailey. “This is the first win for most. It’s been a goal of ours for a really long time. Every year we’ve come here, we’ve slightly improved. We started at the bottom and have worked our way up. This year was the culmination of all those years.”

“It is a team effort,” said Bailey. “We’ve had a lot of members of our team that have sailed with us, but weren’t here this weekend, and have continued to help us build the program. We’re a smaller club, relatively. We’re still building our sailing program. To be able to achieve something like this after only a couple of years is pretty tremendous.”

The team’s steady performance through the regatta—a 6-3 record in the first full-fleet round robin, a 7-2 record in the second and then a 4-2 record today in a double round robin among the top four teams—mirrored their workmanlike progress over the past five years. “You show up to these regattas [for the first time] and you don’t know what to expect,” Bailey said.

“You learn things from the competitors and you take a little bit of knowledge away every time. ‘Alright, these guys that beat us are doing this.'” Bailey also pointed to regular scrimmages with the two other clubs on Marblehead Harbor, Eastern Yacht Club and Boston Yacht Club.

“We have to thank those yacht clubs as well because we compete against each other almost weekly,” said Bailey. “I think it shows that steel sharpens steel. The two Marblehead Yacht Clubs that were here are at the top of the leaderboard because we race each other and we’re super competitive.

“Our sailing program, there’s a lot of energy behind it. We’re really excited. The people that have sailed the event and weren’t here are super happy. When we get back, the sailing committee and the flag officers will be super excited.” Each event utilizes the Club’s fleet of 22 Sonars (designed by member Bruce Kirby, who recently passed away). The latter two have age minimums for skippers and crew to encourage team racing as a life-long pursuit. Founded in 2003, 2000 and 2010, respectively, the three regattas are among the most competitive adult team-racing competitions in the world, annually attracting top sailors from across the country and abroad. 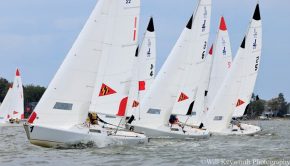