The team from New Orleans—led by skipper John Lovell and tactician Marcus Eagan, and supported both here and in New Orleans by hundreds, if not thousands of family, friends and fellow members—were incredibly consistent through 12 races over 5 days, with 9 top-four finishes and not a single race result outside the top 10.

In some races, it looked simple as the team parlayed solid starts, prescient tactical calls, and superior boatspeed into an express pass to the head of the 19-boat fleet of international yacht club teams. But in other races, particularly in the second half of the regatta, it was a battle as Southern Yacht Club spent a fair bit of time in the back half of the fleet.

“It’s never easy,” said Eagan, who skippered the team’s winning 2017 entry, with Lovell as his tactician. “The leads are always marginal, it’s just crazy. Especially when you’re up the Bay in a light northerly. It was very dicey. It’s all about that one cross or that good start.”

After four straight wins on Day 3 and Day 4, San Diego Yacht Club started the final day looking every bit a legitimate threat to overtake Southern for the championship. But the first race of the day couldn’t have gone any worse; an 18th knocking San Diego out of contention. Royal Thames Yacht Club took the gun, and assumed second place in the overall standings.

The regatta’s final race was perhaps its most mentally challenging, with the breeze fading in and out and shifting frequently. Royal Thames started on the wrong foot by fouling Southern just seconds before the gun. But RTYC tactician Ian Dobson and skipper John Greenland made quick work of the variable breeze to climb right back into the hunt, rounding the first mark one place ahead of Southern.

Being in front was one small victory, but getting enough separation to overcome SYC’s 13-point advantage proved too steep a climb. Greenland continued to slice through the fleet for a third, but Southern was able to follow suit, finishing sixth and becoming the second yacht club, after the Royal Canadian Yacht Club in 2011 and 2013, to win the trophy for a second time.

As is tradition at the Rolex New York Yacht Club Invitational Cup, the final day started with a Parade of Nations around Newport Harbor, complete with multiple cannon salutes. That ceremony completed, all 19 teams and assorted race committee and support craft headed north of Gould Island in Narragansett Bay’s East Passage for an on-time start at 11 am.

It was apparent before the first gun that the day of racing would be anything but straightforward. The breeze, forecast for the middle teens, was barely holding onto double digit windspeeds and regularly dancing right or left of the median wind direction. For a crew with solid boat speed and a lead to defend, it was far from ideal.

“I was pretty stressed; I couldn’t even eat in between races,” said Lovell, an Olympic silver medalist in the Tornado class. “You don’t want to choke. Our goal going into the day was 10 points, and I think we got nine. I can’t thank the crew enough.

Also on the Southern team were Andrew Eagan, Dwight LeBlanc IV, Christian Gambel, Jay Kuebel, Miia Newman, Katy Lovell, and Rick Merriman. Kuebel, both Eagans, Lovell, and Merriman were all part of the winning team in 2017. Merriman is now the only three-time winner of the Rolex New York Yacht Club Invitational Cup, having also won the inaugural edition as part of the New York Yacht Club team.

For host New York Yacht Club, it was an up-and-down regatta that included two race wins, but also a quartet of double-digit finishes. It ended on a strong note for Commodore Christopher J. Culver and his crew as they won the pin, hit the left corner, and took the victory in the final race of the regatta.

“I’m so proud of the team,” said Culver of his crew. “They worked so hard, first to qualify as the New York Yacht Club representative and then all week during the regatta. We feel we left a little bit out there on the racecourse, but every team probably feels that way. So it was really special to finish on a high note. I love our team, they really came together well and were so competitive. The camaraderie is really special as well.”

Another team ending with a bang was the Royal Swedish Yacht Club, which followed New York Yacht Club across the line in the final race to record its best finish of the regatta.

“We were building up to this for three days,” said Royal Swedish Yacht Club skipper Filip Engelbert. “We started off a little bit too hot tempted on board, I think, and then we decided, three days to go, just have a little bit of fun. We were gradually building up and finally we came through in the last race. A happy boat is a good boat.”

Thanks to a second in the first race of the day, Yacht Club Costa Smeralda moved from ninth to seventh in the overall standings, by far its best finish in three Invitational Cup appearances.

“We changed our tactics for the start, and we had a really good start in the first race,” said Edoardo Mancinelli Scotti, the team’s main trimmer. “We had a really good tactician, we went on the left and turned the first mark first. It was a really good race for us and we gained two places in the final standings. This was my second Invitational Cup here in Newport, I just love this place and the IC37 is fantastic.”

But no one was more pleased than Southern. A proud club with a strong sailing tradition, it has established a new standard of excellence at this event, and its domestic championship the Resolute Cup, which it won in 2016.

“It’s just incredible, a wonderful event,” said Lovell. “This is, in my opinion, the best big boat regatta in the world.”

Racing was on September 14-18 for 19 teams from nine countries.

After five editions in the Swan 42 class, the 2021 event was the second sailed in the IC37, designed by Mark Mills. The strict one-design nature of this purpose-built class combined with the fact that each boat is owned and maintained by the New York Yacht Club, will ensure a level playing field not seen in any other amateur big-boat sailing competition. 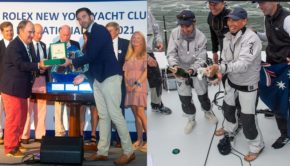