Virgin Gorda, BVI (February 13, 2014) – As the fleet racing got underway at the RC44 Virgin Gorda Cup, it was another perfect Caribbean sailing day for the fleet. 12-17 knots from the east and flat water, allowed the race committee to lay a 1.1 mile course along the North Sound, and slot in four races. Each race produced a different winner, the shifting breeze added drama and passing lanes, but at the end of the first day, the two most consistent RC44 teams were Peninsula Petroleum and Bombarda Racing. 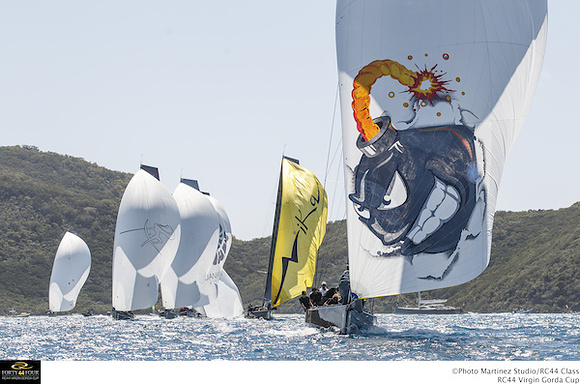 The new Italian team, Bombarda showed the fleet they meant business by winning the opening race, followed by two thirds and a sixth to end the day second overall, just one point off the lead. Owner Andrea Pozzi hadn’t expected a race win on their first day of RC44 fleet racing, but admitted the conditions suited the team. “I like the conditions we were racing in today, the stronger winds suit me much better than the lighter winds, to win the first race was a dream.”

Peninsula Petroleum were one of two boats called over the line early in race two, then clawed their way back to sixth. Vladimir Liubomirov’s Gazprom Youth Sailing Challenge took the race win. It is the fifth year in the RC44 class for Peninsula Petroleum; the Gibraltar based team finished fourth last season and are aiming high this year. Today they achieved one of their goals, consistency with a 2,6,1,3 scoreline. Owner and helmsman John Bassadone happily accepted the team’s bottle of rum, a reward for their race win, and talked through their day. “The level is so high that you can get a win and then a last in the very next race so you have to try to stay calm. We’re thrilled, there’s still a lot of racing to go but the important thing is we seem to be doing well, the guys are sailing very solidly and the results will look after themselves.” 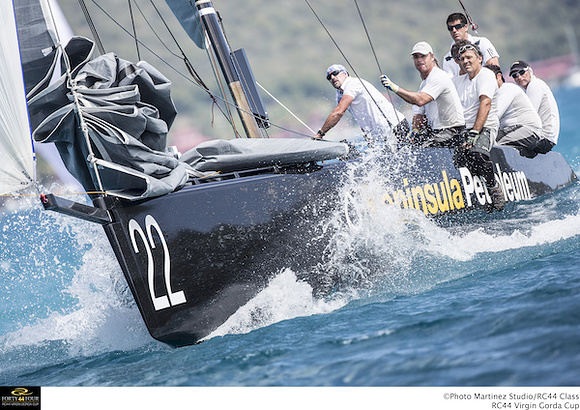 Synergy Russian Sailing team sit third overall, two points ahead of Artemis Racing who finished their day with a race win. In a tight one design class, where no individual race can be discarded, there is little room for error, as the Swedish team’s triple Olympic medallist tactician, Iain Percy, explained. “It’s funny in this class if you have an average score of four you can normally win the event, if you have an average score of six you are almost last and that just sums how close the racing is and how important it is to be consistent. You just can’t afford those bad races, we had a couple today but it was really nice to come back with a win at the end of the day and finish on a high.”

Day two of fleet racing at the RC44 Virgin Gorda Cup will see the nine boats complete a 30 mile long distance race, before the windward-leeward racing returns for the final two days. Follow the racing via the live blog on www.rc44.com