Sheboygan, WI (September 21, 2016) – “If you don’t like the weather in Sheboygan, just wait 15 minutes”. The local proverb has probably never been more appropriate than during the opening day of the Women’s Match Racing World Championship. Result: No racing at all.

A warm front with strong winds, thunder, and heavy rain passed Sheboygan early this morning, leaving behind not only very unstable conditions, but also occasional fog. The very challenging weather conditions really put the regatta organizers to the test.

After an hour’s postponement in the foggy morning, the sailors were sent out on Lake Michigan, just to learn that wind shifts of 90 – 180 degrees made it impossible for the race management to set a proper course. A few matches got into starting sequence, but none could be sailed all the way to the finish. Sailors were sent ashore again to wait, and at 15.00 all racing was cancelled for the day.

“We’re expecting a new front within just a few hours, so it’s better to get all set before that front arrives,” Reichelsdorfer explained.

For Samantha Norman from New Zealand, the difficult weather in Sheboygan was no surprise. The Women’s Match Racing Worlds is utilizing the regularly scheduled Buddy Melges Challenge, an event that Norman won in 2009 during its inaugural edition, and then finished runner-up behind Australian Nicky Souter the year after that.

“I think it was pretty similar conditions the last time we were here,” remarked Norman. “Nice and foggy with shifty winds and big waves. We haven’t matched up against these girls for a number of years now, so we’ll just do our best out there and we’ll see what happens.”

Given the circumstances, the double round-robin will now have to begin Thursday instead, followed by quarterfinals, and then the semis and the final matches over the weekend. There are no plans yet to change the event format. “We’re still early in a five-day regatta, so we’ll just wait and see,” Reichelsdorfer concludes. 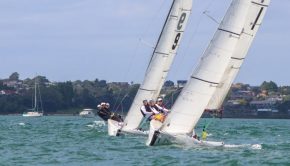