Newport Beach, CA (August 13, 2021) – The semi-finalists for the Youth Match Racing World Championship, hosted by Balboa Yacht Club, were pretty much decided two days ago given that yesterday’s racing was cancelled for lack of wind. But, as the wind returned today, the racing was worth the wait.

With the format revised in which all four semi-finalists would get selected from the round robin stage, there were two more races to complete, and while they would not likely change the identity of the semi-finalists, the matches did provide a preview of the races to come.

Emil Kjaer (DEN), runner-up in the 54th Governor’s Cup, had a rematch with round robin leader Jeffrey Petersen (USA) in the penultimate race of the round robin. The racing was just as close as in the Governor’s Cup when the two raced to a 3-2 final, but in this case, Kjaer prevailed. Going into a semi-finals, having beaten one of your toughest competitors, is a confidence builder.

In the final race of the stage, with both competitors assured of a semi-final slot, David Wood (USA) faced Petersen, and in the usual type of race between these friendly rivals, the race was close. However, Petersen prevailed in the end.

The race was not decided until the last few meters and had Wood won, Petersen’s score would have been equal to Kjær’s and the Dane would have won the tie breaking process and the round robin stage. Even though all were on their way to the semis, the round robin winner gets to pick his or her opponent in the semi-finals which can often be crucial.

After a pause, all four semi-finalists were invited to the race committee boat to hear Petersen’s pick of his opponent. The pick was no surprise given his close races against Wood, with Petersen picking Riccardo Sepe (ITA).

The wind had filled in at 6-8 knots made for great sailing conditions for the Governor’s Cup 22s. In that breeze, tactics became even more important and that was about to be proven as the semi-finals started.

Sepe beat Petersen off the line in their first race and Petersen carried a penalty. Petersen’s speed upwind was up to his usual standards, and he led at the final weather mark. Both boats used some classic match racing moves at that mark which resulted in penalties being killed, with Petersen winning by a few feet.

In one of the few races that did not feature very close racing, Petersen also won his second race to now lead his semi-final match 2-0.

The best match race baton was about to be passed to the last race between Wood and Kjaer. In race 1, Wood returned to the form that won him the U.S. Youth Match Racing Championship in 2017 (with Petersen crewing), as well as the Singlehanded and Triplehanded U.S. National Championships.

After his first semi-final race, which Wood won, he and Kjaer faced off again. Both boats engaged at the start but with less than thirty seconds to go, Wood established control over the Dane as they approached the left end of the starting line and Kjaer could not tack or gybe to return to start until Wood had done so.

Kjaer chose to tack onto port and in doing so, committed two fouls and a red flag from the umpires requiring an immediate penalty turn. But the advantage he had gained was enough to keep him ahead despite that turn.

Kjaer led for the next two legs which left only the final downwind leg to the finish, but with a penalty turn still to do. As he had done in a race earlier in the day, he waited to do the turn until right before the finish. It requires taking down the spinnaker, heading up and tacking, and then trying to turn down to the finish line.

In the previous race, he had done so very close to the line and was successful. However, this time Kjaer was perhaps a boat length farther from the line. At this point, Wood, still under spinnaker, got a puff and closed the gap. As he was fast closing on Kjaer, it was impossible to tell who would win. In the end, Wood crossed barely a foot ahead.

So, tonight, both semis are 2-0 giving the Californians an advantage going into tomorrow’s racing. First to win three will advance to the Finals. Conditions are expected to be similar tomorrow, and the racing is scheduled to continue at 1130 hours PDT (UTC-7). 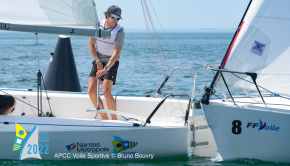