The America’s Cup? Fine. The Mark Foy Trophy? New Zealand wants that, too. Both stand to be available to the Kiwis Sept. 7-15 when San Francisco Bay hosts eight New Zealand teams among those competing in the Nespresso 18′ International Skiff Regatta for the Mark Foy Trophy, while sharing the waterfront race course on race The 2013 European championship for the 18-foot skiff in Carnac, France. Photo ©ThMartinez.com PHOTO: Not quite as intimidating

A skull and crossbones is a symbol that warns of danger, but looks kind of cute when it is turned 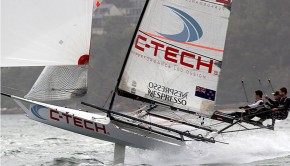 This never gets old. Photo by Frank Quealey/Australian 18 Footers League Big fella back in saddle