One of the aspects of getting old is that you have seen stuff. And after 49 years of racing and sailing, Geoffrey Emanuel is not too impressed with what he has seen.

His sailing roots are New England, and his racing spans from singlehanded dinghies to 12 meters, offshore, coastal and lake sailing throughout the U.S., plus four years as a junior sailing instructor.

After observing over time the refinement of youth sailing, Geoffrey describes how he believes it has negatively impacted the sport….

I am thoroughly convinced that what sailing needs is a grenade rolled into the room I see full of Status Quo thinking.

The vast majority of U.S. junior training evolved from a balanced effort to teach a love for sailing, seamanship and racing skills in the 1960s-1980s, to today’s disproportionate emphasis not only on racing but on winning. Junior sailing mimics the winning-is-everything mantra of almost all youth/school sports.

The unintended consequence of our current state is a rapidly declining interest in sailing by former junior sailing participants that have moved into adulthood. Most of the explanations for this phenomenon come across to me as excuses or defense of the Status Quo rather than an objective attempt to question everything with the sole interest to identify and solve the problem.

Certainly not all junior programs fall into these traps. But I think that too many do. I don’t think anyone should be surprised that this approach to training kids results in many dropping out from the sport. Why? Burn out from incessant racing, traveling, competitive pressure and ultimately boredom of doing the same thing over and over again. It hasn’t done much for the development of Olympic-caliber sailors either.

Very little of what modern junior programs teach is for the love of just sailing. That love inspires many of us to do just that. How many junior sailors do you know that can’t wait to just go for a random sail with no particular destination or agenda in mind? Most of the older adult sailors I know crave every moment on the water, regardless of whether they race, cruise or day sail.

This sport needs zero-based re-think where anything and everything we do today is subject to question, critique and wholesale change.

Here are the adverse consequences as I see it to our approach to teaching youth sailing:

1. The nearly exclusive use of singlehanded dinghies (mainly Optimists) for beginner to intermediate training flies in the face of common sense when it comes to teaching the development of both skippers and crews. Graduates of an Optimist-dominated tenure, which runs as long as 7 years, are unlikely to understand what crewing is all about. While their skippering skills may be well developed, they at best are not used to answering to any authority inside the boat (i.e. another skipper) and at worse have developed self-absorbed arrogance about their own sailing prowess. Skipper only training does not and, I submit, cannot produce good crews. Traditional junior programs rotated 2-3 kids in one boat between skippering and crewing on a balanced basis.

2. Putting most 8 year olds in a boat by themselves is insensitive to most humans’ innate fear of the water. That fear is amplified when you are alone on the water. Graduates of traditional junior programs never sailed alone at least for the first 3-4 years on the water. Furthermore, starting out in a boat with 1 to 2 other kids was just plain fun. If one or all got scared, at least they had each other.

4. Nearly half of my time spent as a student was sailing for the pure fun of it. We did organized water fights, point-to-point sails to an island or a beach, capsize “drills”, capture the flag, etc. All of this time spent “fooling around” taught us unique boat handling skills and contributed to an instinctive love for just being on the water that do not get developed by racing or practicing racing all the time.

5. We graduated to boats like 420s on an exclusive basis from tubby Interclubs, Turnabouts or other 2-3 man boats by age 12. By then, a natural selection process culled out most skippers from crews. Today, many kids making the transition from Optimist consider crewing to be a demotion at best to an insult at worse. Who can blame them? After as much as 7 years sailing alone and in charge, who wouldn’t feel slighted?

6. Travel teams are ubiquitous in all youth sports and are a major change from earlier years. But sailing travel teams face major expenses, time commitments, and effort compared to traditional travel team sports. These include being sometimes hundreds of miles from home at expensive sailing venues, sometimes requiring multi-night stays in hotels and eating most meals out; trailing or car topping at least your own boat but sometimes having to tow large, ungainly multi-boat trailers, requiring trucks, SUVs or minivans to pull them. Traditional junior programs hosted mainly one day only invitationals, used club and/or member-owned boats based at the racing destinations and rotated boats and crews to equalize faster from slower boats.

Comment: This book below, Royce’s Sailing Illustrated, was my guide as a new junior sailor in the 70’s, and I recall it teaching me all the skills that Geoffrey lists in item #3. – Craig Leweck, Scuttlebutt 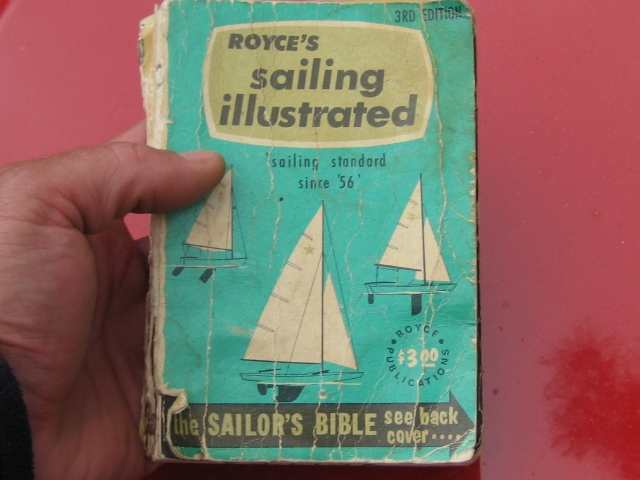