Twenty-one Buccaneer 18s competed for their North American Championship (September 29-October 1) at Niantic Bay Yacht Club in Niantic, CT. Sailing in predominantly northerly winds in the lee of the shore on Niantic Bay, the Buccaneers enjoyed optimal racing conditions as winds were constantly in the 12-15 knot range allowing for excellent upwind competition and some exciting downwind planning.

PRO Harlan Fredericksen noted, “The 21 2-perrson crews from across the country enjoyed campaign conditions as the offshore winds let us race without a big sea state, allowing the boats to fly upwind and down.”

After a dozen races, it was Ed Montano (Kenosha, WI), sailing ATREVIDA with Trevor Bath (Milwaukee, WI), on top of the podium capturing his third consecutive Buccaneer 18 North Americas title. Montano finished with 18 points (all top-3 finished after throwing out two fourths), 10 points ahead of John Weiss (Kenosha, WI) and Jay Foght (Kenosha, WI) on BLIND SQUIRREL with three wins in their total. In third, with 31 points were Jimmy Yurko (Solomon’s Island, MD) and Evan Scott (Hollywood, MD) aboard WASABI with four bullets to their credit.

Ed Montano commented, “What a weekend! We had some interesting races in different conditions. It was really a game of Chutes & Ladders as the Buccaneer 18 fleet has gotten pretty competitive over the last few years. Going into Sunday, anyone of a handful of boats could have won. These boats are versatile and fun to race in a variety of conditions. I enjoyed every bit of this regatta. And, the Niantic Bay Yacht Club put on a great show for us.”

The Buccaneer 18 NAs also had a B Division that was won by Nic Bogren and Connor Burke. 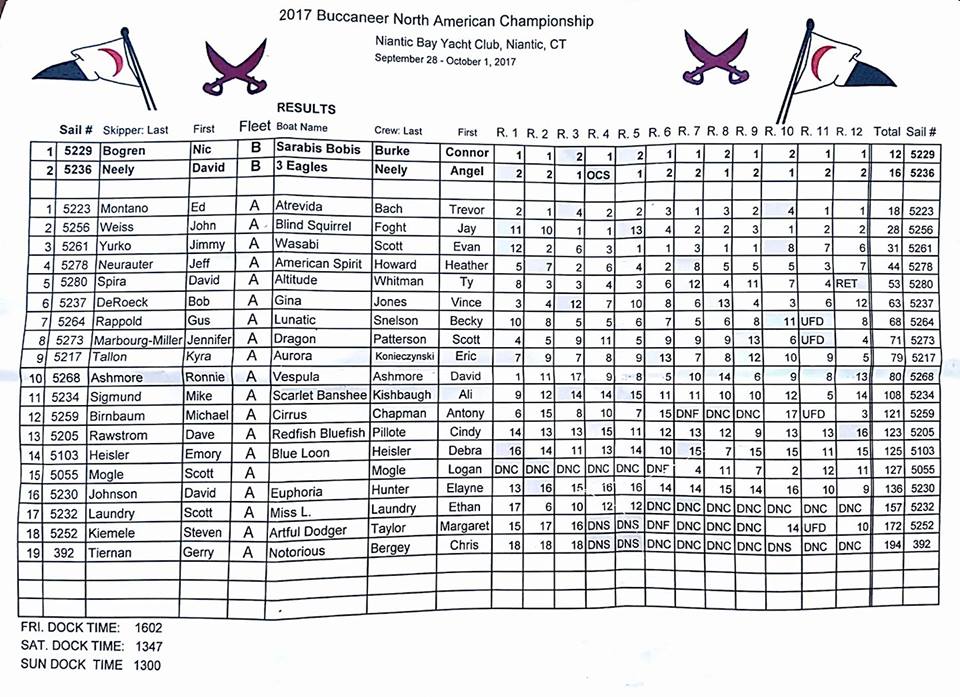