To fast track their education with the AC75, Swiss America’s Cup challenger Alinghi Red Bull Racing has enlisted the services of Kiwi cup veteran Dean Barker plus Pietro Sibello who worked with Luna Rossa Prada Pirelli in the 2021 Match. But their first day of sailing on August 31 didn’t go as planned…Sibello tells the story:

I woke up at 6:30 am, had breakfast and came down to the base on my bike. The good thing about commuting early in the morning is that I avoid the busy streets of Barcelona. Having said that, I still met a few groups coming back from their late nights.

The morning meeting with the shore team confirmed the day’s plan: we’ll go out, hoist the sails and sail. It’s such an important moment for us, for the shore team, and for everyone engaged in this campaign. Preparing an AC75 to sail takes a really long time, especially for a new team. Everything and everybody must come together perfectly to make things happen.

Dean and I have been giving input to them, sharing our past America’s Cup experience in, amongst others, building good communication between them and the designers to enable the right set up of the boat.

And it started with the simulator, helping them familiarize with the boat handling, but it doesn’t matter how much preparation you do ashore. Nothing compares with what we will experience today: getting wet – literally – on the boat.

Back to the daily routine: we’re going sailing today, so we have a day off from the gym. After the morning meeting, I head to my second coffee of the day, an important moment for an Italian like me.

The atmosphere was pretty emotional at the base and on the water. The chase boats were packed, everyone wanting to be part of this milestone. The recon unit was following our every move. Even though this boat has already sailed in the past, it felt like the launch of a new boat, in Alinghi Red Bull Racing colors.

Once we checked all the boxes we had planned for the first day, we stopped the session and started debriefing, with a good feeling of achievement. We put the sails down and started being towed to the shore just before the rain arrived. The visibility went down to almost nothing in a flash.

Our emotions switched as well from sun to rain, the excitement from the first sail swapped to the urgency of bringing the boat home. The wind picked up very quickly, the boat was difficult to control and capsized. I think it was the first time an AC75 was in such a storm, it was a new situation for everyone.

Although we didn’t have the answers to everything, there was a very good management from the sailing and the support teams. We were prepared and ready to face this kind of situation, we stayed calm to face it the best we could. The organization was clear and efficient, the men overboard were picked up very quickly. But it doesn’t matter how prepared you are, you can’t do anything against a wind squall of this intensity.

We had in mind that these storms leave as quickly as they arrive ; it was all about limiting the damage. As soon as the boat was back up, the technicians jumped onboard and we had the first assessment of the boat.

These things happen, sooner or later. It just gives a six month team building in a few minutes: the team spirit was strong, we were all helping each other. After sharing emotions as strong as we did on Wednesday, it brings the team stronger together.

It was a late finish in the shed, with the team meeting to assess the situation and the next steps. I headed back home, just like the other sailors, while the shore team had a long night ahead. While biking uphill, I was thinking about this roller coaster day. I went to bed with many things in mind but the main one was that I could go to sleep knowing that I can trust my team! 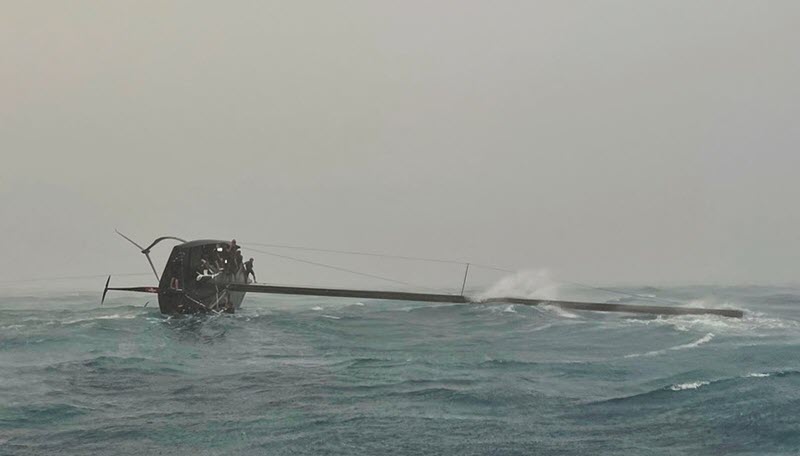